Flames soak up sun, wrestle to seventh-place showing in Fla. 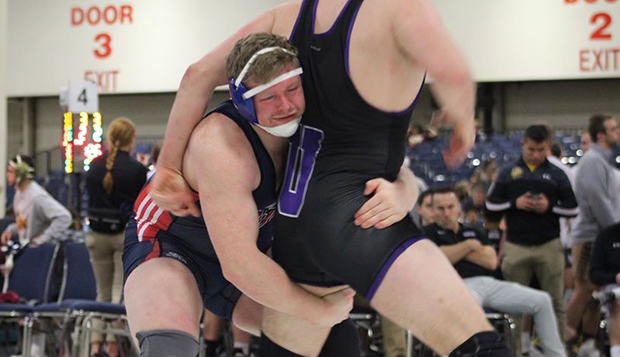 Junior heavyweight Jeffrey Allen attempts a takedown on his way to the finals. (Photos courtesy of Sherry Richmond)

Weaver, one of three Flames wrestlers battling flu-like symptoms, recorded a 3-1 decision over Baldwin Wallace's Jarod Miller and a pin over Augsburg's Zachary Muller in 5:28 to set up a semifinal clash with the University of the Ozarks' top-seeded Jerhett Lee, the third-ranked NCAA Division III heavyweight in the nation.

"That was a major upset," Liberty Head Coach Jesse Castro said of Weaver, who held off Lee, 3-1, to advance to the final match against Allen, who prevailed, 4-3 in double overtime. "For both of our heavyweights to be in the finals of this very tough tournament, I think we surprised a lot of people."

Both Allen and Weaver escaped to account for the only points scored in regulation and were held scoreless in the first overtime before both escaped again at the end of the second and Allen was awarded a stalling penalty point.

"That was a really tight, and long, match," Castro said. "They were mostly on their feet, hand-fighting. Their defense is just so good that there was not a lot of scoring."

In all, the Flames were represented by 16 wrestlers, who competed in nine of the 10 weight classes, all but 133 pounds. They were the only NCWA program in the 14-team tournament, which featured mostly NCAA Division III and NAIA schools.

At 197 pounds, Flames graduate Austin Amos, a two-time defending NCWA national champion, advanced to the championship semifinals with a pin of Ferrum's Cullen Nash-Cleek in 3:30 and an 8-3 decision over Washington & Lee's Brad Basham before being pinned by NYU's second-seeded Jack La Corte in 2:49 and bowing out due to his bout with the flu.

In the same bracket, Liberty freshman Blake Barrick bounced back from dropping a 5-1 decision to Baldwin Wallace's Zeckary Lehman in his first match to win six consecutive consolation round matches and finish third. He scored 16-0 technical falls over John Carroll's Christian Hipsher and Keiser's Caio DeAlmeida before winning by injury default over Rhode Island's Daniel Sblendorio and winning by 8-0 major decision over Nash-Cleek and medical forfeit over Amos. In the consolation final, Barrick shut out Basham, 3-0, to clinch third place.

Flames junior Chad Cantrell won his first 157-pound match by fall in 4:03 over Julian Mares of St. John's before scoring a 7-5 decision over Washington & Lee's Ryan Luth. He slipped to the consolation bracket by dropping an 8-2 decision to John Carroll's second-seeded Sam Goss before earning 12-3 and 21-9 major decisions over John Carroll's Shane Ging and Rhode Island's Sean Caltagirone, respectively, to reach the fifth-place final. There, he was pinned by Baldwin Wallace's Dalton Leightner in 4:17.

At 174, Liberty senior Cody Richmond overcame an opening loss to Ferrum's Malik Barr to win his first two consolation matches by fall — over NYU's Kainalu Huddy in 5:42 and Baldwin Wallace's Aiden Cardaman in 5:33. He scored a 7-1 decision over John Carroll's Stefan Farian and a medical forfeit over John Carroll's Seth Winkle before eventually pinning Cornell's Wylie Allen in 1:37 in the seventh-place match.

Freshman 184-pounder Ethan Martin had to withdraw due the flu and junior Sam Karel won his ninth-place match by pin over NYU's Gabriel Rodriguez in 2:44. Junior Andrew Burgette had to default due to a shoulder injury after wrestling six matches at 165.

Castro was pleased with the Flames' performances considering the number of injuries and sicknesses they dealt with.

"It was a very respectable showing," he said. "I like where we are. You could tell coming off of a break that the guys had definitely trained. Our conditioning was fairly good, but the time off hurt us technically, where we were a step behind. We've got a lot of work to do to get back on track."

After celebrating the New Year with their families, Liberty's wrestlers will return to Lynchburg, Va., on Sunday to begin two-a-day training next week in preparation for the 40th annual Virginia Duals on Jan. 10 at the Hampton Coliseum.