Flames rise to No. 2 in this week's ACHA Division I rankings 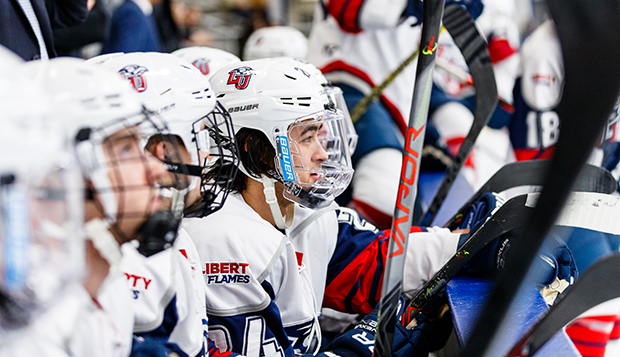 Liberty University's ACHA Division I men's hockey team, which finished the fall semester with a commanding sweep of Slippery Rock to raise its record to 18-3, climbed four rungs to No. 2 in this week's ACHA DI national rankings, its highest in the 14 seasons it has competed at Division I.

"It's a real affirmation that we have worked hard in the classroom, and the ice, and off the ice to get us to this ranking," Flames Head Coach Kirk Handy said. "It is a great group of guys that is willing to work hard and we will continue to push them."

Liberty started the season on its longest winning streak since 2009, when it went undefeated until after Thanksgiving and rose as high as the No. 3 national ranking. The Flames leaped over new No. 7 Arizona, No. 4 Lindenwood, new No. 5 Michigan-Dearborn, and new No. 3 Minot State, the reigning national champion.

"Our guys played pretty consistent all semester and have worked hard to keep our game consistently at a high level," Handy said. "We will keep working and pushing and refining our game. We know that we need to be a whole lot better and take our game to another level to continue to be successful the second half of the year."

Two of Liberty's three losses this semester came at 2018 national champion Adrian College, which has occupied the No. 1 spot for the past eight rankings. The Flames will get two more shots at the Bulldogs when they visit the LaHaye Ice Center on Feb. 21-22.

Before then, they will play five consecutive weekend series against ESCHL opponents — starting and ending with home (Jan. 17-18) and away (Feb. 14-15) matchups with Delaware.

"If you look at our schedule, we start off the semester at home against No. 20 Delaware before playing at No. 11 Stony Brook and have No. 24 NYU at home, so there are going to be a lot of big games," Handy said. "The Adrian games will be big ones as well, but we don't want to get too far ahead of ourselves. We want to take a game at a time and maintain the consistency of the way we compete day in and day out."

He believes the Flames' upcoming trip to Finland from Jan. 2-12 — when they will play a couple games as well as sharing testimonies and leading clinics and devotions for youth — will be a unifying shared experience that will help build chemistry within the team.

"That only makes us stronger, and is also one of the reasons we're all here playing and coaching at Liberty, for a bigger purpose," Handy said. "It's about having our guys be transformed as well. That's going to be a big part of our success in the second half of the season, that mindset, for sure."

Liberty is hoping to peak in the postseason and at the March 19-24 ACHA DI National Championships in Frisco, Texas, in particular, when its ranking will help determine its seeding and potentially make a smoother path to their first national title. The Flames, who scored a second-round win over Arizona before falling to top-ranked Lindenwood in the quarterfinals of last season's tournament in Texas, have only made one Final Four appearance, in their second season of DI competition in 2007-08. 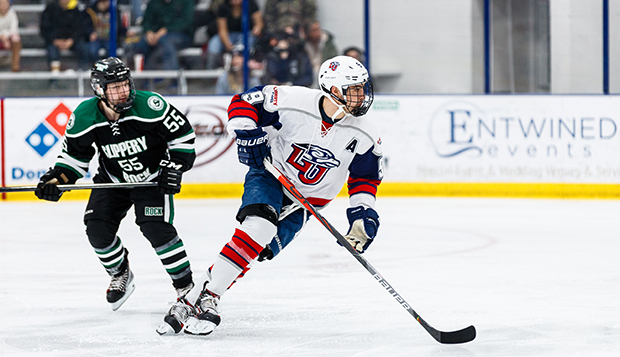