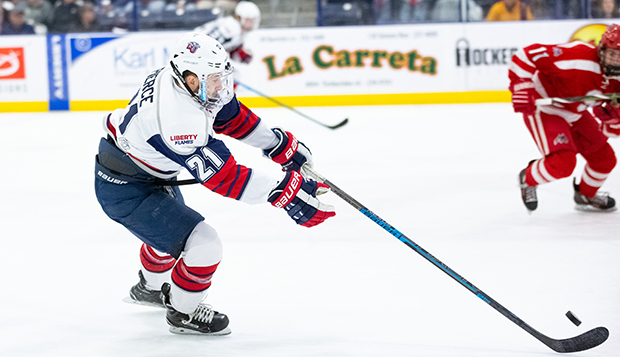 Pierce, who transferred to Liberty in January 2018 and was designated head captain in August, opted to hang up his skates due to a series of concussions that sidelined him for the previous 13 games, since an Oct. 11-12 trip to Rhode Island. He ended that streak by taking the opening faceoff Saturday before returning to the bench and retreating to the hallway outside the Flames' locker room to pray.

"It all hit me in that moment, kneeling in the hallway, how much it meant to me to battle with those guys every day and how much Liberty means to me," Pierce said. "It really has changed my life, the opportunity I had to grow mentally, physically, and spiritually. It was incredible. It is, for sure, the best group of guys I've been around, on and off the ice."

Pierce, who celebrated his 23rd birthday last week, drove to Franklin, Tenn., on Tuesday and will transfer to Belmont University starting next semester to complete his undergraduate degree in exercise science before pursuing a master's in physical therapy.

He became interested in physical therapy after fracturing his tibia during his last season of junior league play, as a head captain with the Milton Ice Hawks of the Ontario Junior Hockey League.

"Through doing physical therapy, I felt a strong desire to be one myself, if it's God's plan," said Pierce, whose wife, Emma, is an occupational therapist. "It's been the toughest couple months of my life, but I've felt a peace about it from God because He's closing one door and opening another."

He said his last concussion came in a March 17 overtime loss to Syracuse in the ESCHL Tournament championship game in West Chester, Pa.

"Ever since then, I have felt off, like something was not right," he said. "I was kind of foggy and it became worse if I would skate or do any intense exercise. It was starting to affect my schoolwork."

He consulted with doctors who advised him to cease playing the sport that he has loved since attending his first Nashville Predators NHL game with his father at the age of 4. He took skating lessons that same year and started playing hockey when he was 6, leaving home at 14 to compete in the junior circuit.

After marrying Emma, his girlfriend since he was 14, on Aug. 4 — the same day that alternate captain Brock Thompson got married and the day before fellow senior forward Cody Clarke was wed — Pierce said Saturday was at least as emotional.

"Fortunately, I never had to go through a breakup with Emma, but it felt like I went through 25 breakups with those guys," Pierce said. "There were a lot of tears in the room after how much we've grown together in the last couple years. It was definitely one of the hardest days in my life, but they've been so supportive. I'm so excited to have friends like that, and to be a Liberty Flame for the rest of my life is such an honor."

Pierce expressed his appreciation for Liberty's dedicated coaching staff, which reciprocated the sentiment.

"That's tough to see him gone," senior forward Andy Clarke added. "It's an empty spot in the dressing room, for sure. He was a strong second-line center and he was also good on the draw. We're all collectively trying to fill that void, which is hard to fill because he's a big part of this team, with his leadership."

Pierce has faith that his teammates will carry on what they started in an 18-3 fall semester and earn a return trip to Frisco, Texas, for the ACHA DI National Championships in March.

"I think they can win it all this year, I really do," Pierce said. "There is so much heart in that group that I have no doubt they're going to take it all the way at nationals. I know that all the pain that I have experienced is part of the plan for God to use for His glory."

He said the team definitely has the talent and drive to capture its third ESCHL regular-season title in a row and reclaim the ESCHL Tournament championship for the third time in four seasons.

"It's so tough to leave and to say goodbye to those guys in the locker room, but at the same time it's also comforting because we have so many great leaders in there," Pierce said, referring to senior forwards and alternate captains Thompson, Victor Blomberg, and Josh Hamilton, as well as senior forward Quinn Ryan, junior forward Jordan Bochinski, and senior defenseman Jacob Fricks. "Everyone in the room had a feeling this was a really special group, and this can be a spark, just what the team needs to become national champions." 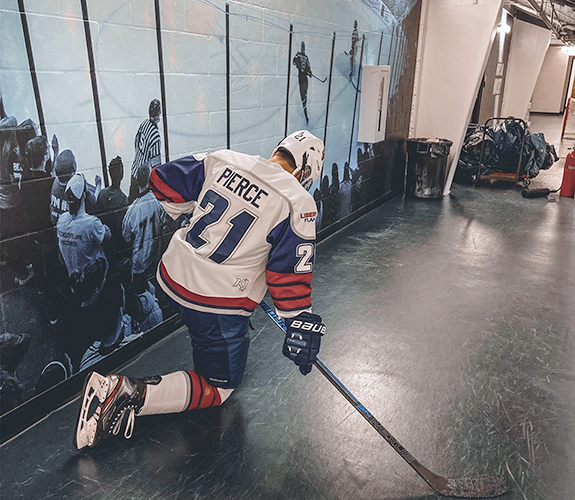 Devin Pierce has quiet time in the hallway after taking his final faceoff to start Saturday's game.