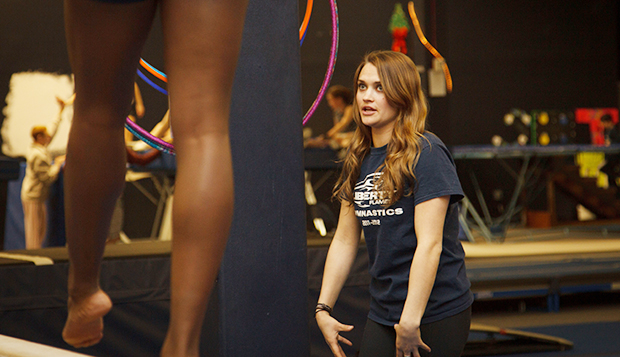 Rachel (Steele) Harrison, who won an NAIGC national title on the balance beam, works with a Lady Flames gymnast in that event during a practice out of Liberty's facility in 2012.

Former Liberty University gymnast and Head Coach Rachel (Steele) Harrison was 3 years old when she started practicing gymnastics, and she started competing soon thereafter before launching her coaching career at the age of 12.

"When I was 1, my parents found me walking across the top of the swing set," said Harrison, who will be one of four new members inducted into the sixth class of Liberty's Club Sports Hall of Fame on Saturday afternoon. "They put me in gymnastics and, honestly, I never looked back."

She traveled internationally and throughout the United States and Puerto Rico to compete, eventually working her way up to Level 10, the highest in USA Gymnastics.

The Pennsylvania native wanted nothing more than to continue competing in the sport upon arriving at Liberty in 2008. However, since there was not a program in place, she felt the Lord calling her to establish one.

"Not having a program was a big deterrent for me to come to Liberty because I had offers to compete at other schools," Harrison said. "But it was the Lord's guidance that led me to Liberty, and when I arrived, I knew I was supposed to advocate for a gymnastics team, which had been a dream of mine since I was young."

She decided to go straight to the top, to Liberty President Jerry Falwell Jr. — who was inducted into the Club Sports Hall of Fame's inaugural class in 2014 — and she was rewarded for her boldness.

"My freshman year, I approached Jerry Falwell Jr. after a Convocation (in the Vines Center) and he gave me his business card and I contacted him," Harrison said. "He gave us the go-ahead and a lot of support. That was pretty exciting as a student-athlete and to be able to go on to coach was a big privilege. That was a huge opportunity so I'm very thankful for that."

Harrison reached out to Lori Darter, co-owner of Lynchburg Academy of Gymnastics, where the team would practice under Darter's supervision.

"We recruited a lot of team members and had a lot of interest," Harrison said, noting that more than 20 people attended an initial meeting. "It was pretty exciting. I was actually very surprised at how many gymnasts were on campus and were really interested in joining the team."

The program would eventually move into its own gym in space made available in The Plaza shopping center, owned by Liberty. A renovation was completed and new equipment added in 2014, two years after Harrison became head coach.

"That was fantastic to have our own space, and all of the equipment was top-notch," Harrison said.

She worked with some highly gifted gymnasts, but also opened the program up to those who were less experienced and interested in learning.

"That was an exciting chance to grow as a team, though we narrowed it down to where we had a competitive team and a practice team," Harrison said.

As a competitor, she traveled to three National Association of Intercollegiate Gymnastic Clubs (NAIGC) championship meets, winning an individual national title on the balance beam in 2010. As the Lady Flames' head coach from 2012-15, she was instrumental in developing the program and sending athletes to nationals, where she continued to compete in the alumni division.

"We had a fantastic bond throughout the student-athletes on the team and it was a really unique experience for them, as they really grew as individuals and hopefully in their relationship with Christ," Harrison said. "We made sure we were engaged with one another outside of the gym, their whole lives."

She graduated from Liberty as an honors student with a 3.82 grade-point average and received a B.S. in Clinical Health Promotion in 2012 before going on to earn her Master of Public Health degree in 2015, while maintaining a 3.89 GPA.

"Doing gymnastics throughout my career, both in high school and college, really spurred me to maintain top grades and excel at what I could," Harrison said.

For the past five years, she has worked as a nutrition counselor at Fuel First Nutrition, LLC, providing individual nutrition consultation and developing meal plans geared toward athletes as well as patients dealing with weight management, eating disorders, and diabetes control. Harrison also works locally at the Johnson Health Center in Lynchburg.

She is married to Sterling Harrison and the couple has two children — Micah, who is 2½, and Grace, 1. At Saturday's ceremony, she will be presented by former Lady Flames teammate Tiphani Comena, who also served as a bridesmaid in her wedding.