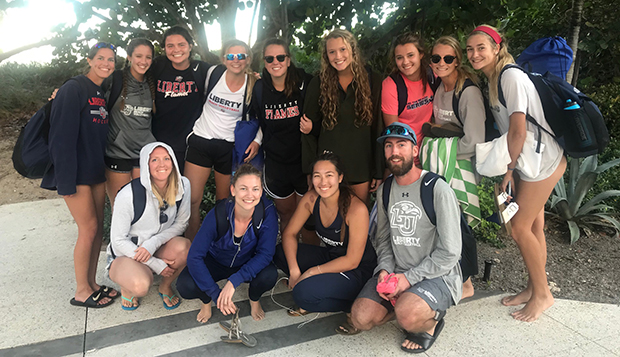 A first-ever fall semester trip to Florida proved to be a fruitful time both on and off the court for members of Liberty University's women's beach volleyball team.

"They mixed up pairs throughout the night and we kept the same pairings we have had all year," Liberty Head Coach Kaleb VanDePerre said, noting that each duo played two best-of-three matches. "We saw a lot of competitive volleyball. (Senior) Alyssa Register and (junior) Emily Lagerquist played the best they have all year and were really doing a variety of things well. (Junior) Katelyn Dilcher and (sophomore) Jenae Baker also looked really solid all weekend."

After the match, a Palm Beach Atlantic player led the two teams and their coaching staffs in a devotional before they shared a meal and time of fellowship.

"It was such a great experience for both schools and great to see so many athletes bonding over volleyball and their love for Jesus," VanDePerre said.

On Saturday, Liberty traveled half an hour down I-95 to Pompano Beach, Fla., to compete in the Dig the Beach event, entering teams in the AAA, AA, and A divisions. In a tournament played in windy conditions, the Lady Flames faced some of the best competition they will see all year.

"Our AAA girls got a lot of great experience and although they only went 1-3, they got better as the day went along and saw a lot of great improvement," VanDePerre said. "All three teams in AA made it to the playoffs and we had two teams tie for fifth place and one team get ninth."

In the A bracket, Liberty graduate student Rylie Rice and senior Courtney Fukumitsu, who will graduate in December, won the championship match after freshmen Genessa Sirard and Olivia Litzau sustained their first loss in the semifinals, by a 21-19 score.

"All of our girls had a great time and both events were so well put together," VanDePerre said. "The memories and experiences we had will last a lifetime and the level of play just fires us up for next semester. We will be out of the sand for a few months, but still working out with Ross (Garner), our strength coach twice a week and getting ready to hit the sand running next semester."