Women's team wrestles Ferrum College to a draw at Salem 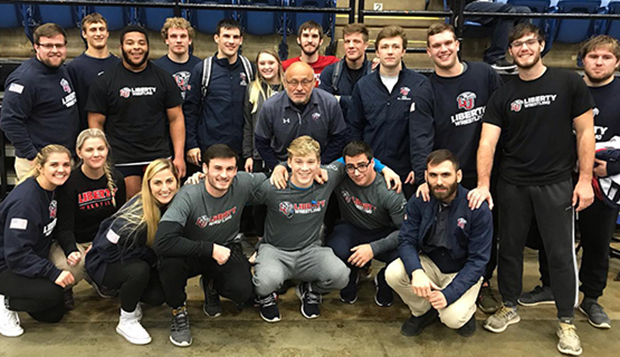 The Lady Flames and Panthers were tied at 20-20 after regulation and Ferrum, an NCAA Division III program that wrestles in the Women's Collegiate Wrestling Association (WCWA), wound up winning on the first criteria of most pins.

"It was awesome," Liberty Head Coach Jake McIlhenny said. "It was a definite improvement from last year. We brought nine team members and all of them got to wrestle two or three matches. We ended up losing, but we got to wrestle so the girls were super excited."

Wrestlers competed in freestyle, rather than folkstyle, which will be used during the NCWA National Duals, set for Jan. 24-25 at Liberty, and the NCWA Grand Nationals, which will return to Allen, Texas, from March 12-14.

"We are confident in our girls and their ability to adapt," McIlhenny said.

Sophomore Rebekah Kemper, one of the Lady Flames' two new wrestlers this season, won one of her exhibition matches.

"Overall, the girls wrestled really well," McIlhenny said. "I was proud of them for meeting the challenges of making weight and traveling. They all came in ready to wrestle and came off the mat with a smile on their face."

He said it was equally satisfying seeing the wrestlers supporting their teammates from the sidelines.

"There was a ton of energy coming from the bench, which was fun to be a part of," McIlhenny said. "The girls were very vocally involved with each other's matches. The team culture and family atmosphere these girls have created is our greatest strength, which translates into working hard in the room and encouraging each other in practice."