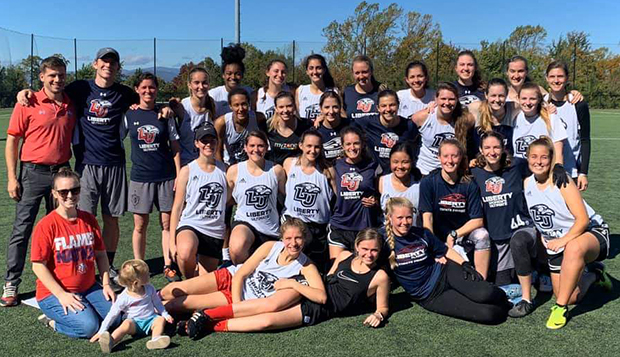 Competing in its last two tournaments of the fall season, Liberty University's women's Ultimate team finished higher than projected Nov. 2-3 in Axton, Va., and this past Saturday at the University of Richmond.

The Lady Flames' top lineup was seeded 12th and finished ninth out of 20 teams at the Blue Ridge Finale, a USA Ultimate-sanctioned event at the Smith River Sports Complex in Axton. That is the site of the Atlantic Coast Regional Championships, the qualifier for the May 22-25 USA Ultimate Collegiate National Championships in Milwaukee.

"We went 2-1 on the first day and 1-2 the second day, winning the consolation bracket," Liberty Head Coach Jonathan Mast said.

On the first day, the Lady Flames warmed up by dominating the University of North Carolina Chapel Hill's B team, 13-1, before recording a 13-3 triumph over 13th-seeded Oberlin (Ohio).

"We let everyone rotate evenly and focused on implementing our cutter continuation and dump-swing set offense, which worked phenomenally well," Mast said, of the new system that emphasizes shorter passes and quicker movement. "That was the best we've played in the three tournaments we have been to this semester. The girls started clicking a little bit."

Liberty's captains, sophomore Brittany Fowle and senior AnnaMarie Hagerty, have developed a deep passing combination and excellent chemistry, along with the Lady Flames' handling corps of juniors Mikayla DiSarle and Briana Kuo and sophomore Lydia Vernon, which has progressed quickly.

After dropping its third and final game of pool play against seventh-ranked Penn State, 10-7, high winds forced Liberty out of its new offensive system in a 12-4 loss to fifth-seeded Florida, which sent the Lady Flames to the consolation bracket.

"We hung with (Florida) and were tied 2-2 before they started breaking us left and right, beating us by hucking deep throws and playing defense," Mast said. "The wind plays to that kind of game style."

Liberty lost to ninth-seeded Duke, one of the stronger defensive teams in its region, 12-5 in the consolation semifinals, before upending 10th-seeded Case Western Reserve, 11-6, to clinch ninth place.

Fowle paced the Lady Flames in goals scored, Hagerty was the team's assist leader, and graduate Victoria Dissmore made the most defensive knockdowns, many at critical times.

Mast then sent two teams to this past Saturday's Monument Games in Richmond, where Liberty's veteran-led team finished 4-0 and its younger lineup went 1-3.

The Lady Flames' top team defeated the rookie-based squad, 7-1, before sweeping both Richmond and an UR alumni squad by 13-6 scores and completing tournament play with an 8-0 victory over Virginia's B team.

"I let the veterans develop themselves and the captains to take a bigger leadership role in figuring out how to adjust to certain defenses," said Mast, who focused on coaching the younger team.

"Our rookie team did really well and is really growing," Mast said. "They learned more that weekend than in weeks of practice and I could see the natural strengths and weaknesses of players to know how to use them in the spring."

Liberty will open its spring season by entering one combined team at the Jan. 25-26 Winta Binta Vinta in Charlottesville, Va., a 10-team tournament that will feature JMU as well as host UVA, VCU, Virginia Tech, William & Mary, and a few teams from North Carolina and Pennsylvania.