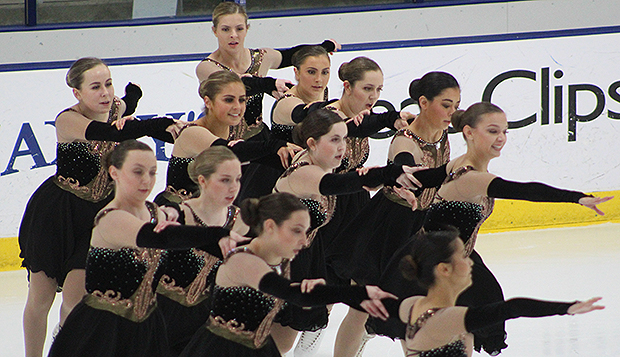 The 12 members of Liberty University's synchronized skating team will showcase their 2019-20 program for the first time in competition at this Friday's and Saturday's Boston Synchronized Skating Classic at the New England Sports Center in Marlborough, Mass.

"We're excited to see how this program goes because we haven't been able to perform it in front of any judges or officials," Lady Flames Head Coach Tatiana Payne said. "We can see what we have to look forward to (as far as competition goes) this season and areas we need to improve."

Liberty will be one of four teams skating in the Collegiate Division, along with host Boston University and two combined teams called Mirror Images and Team Excel. All four will also compete at the Jan. 17-18 U.S. Figure Skating Eastern Synchronized Skating Sectionals in Albany, N.Y., along with Delaware and UMass. The top four teams at that competition will qualify for the Feb. 26-29 U.S. Collegiate Championships in Providence, R.I.

The three-and-a-half-minute program, called "En Memoria" and set to Andy Grammer's song, "Don't Give Up On Me," is dedicated to family and friends of team members and coaches who have passed away due to cancer and other illnesses, and others currently fighting those battles. Payne's close friends lost their son to stomach cancer this past summer.

"We are trying to honor those people in our lives who have left a lasting impact through their struggles," Payne said. "This year's program is a lot more technically difficult and has a totally different vibe than last year's," which was skated to a compilation of "Hunger Games" soundtracks.

"It is a hopeful, encouraging program about not giving up and pushing on," Payne added. "It has been very well supported by everyone on the team and has a very meaningful message."

Next weekend, the Lady Flames will travel to Michigan to compete in the Kalamazoo Kickoff against Adrian, Michigan, Michigan State, and Western Michigan.

"Attending these competitions will give us a good opportunity to see how we will fare with teams in the MIdwest as well as those in our Eastern Section," Payne said.