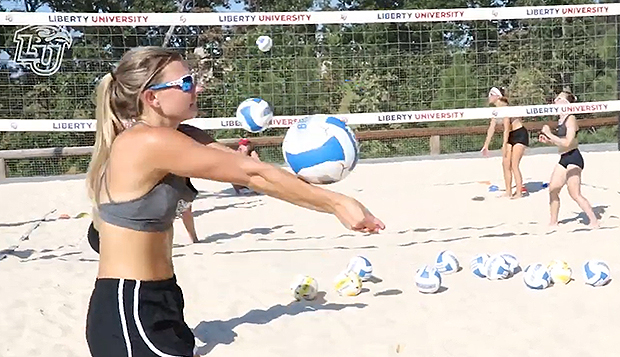 Liberty University's beach volleyball team will send 12 of its women's players to compete as six pairs in a tournament hosted by Palm Beach Atlantic University in Pomona Beach, Fla., this weekend. The Sailfish are in their first season as an NCAA Division II program and have a former Lady Flames player, Samantha Evans, serving as an assistant coach.

"We're ready to roll," said Liberty Head Coach Kaleb VanDePerre, who also serves as head coach of the Flames' men's indoor volleyball team. "We've got a lot of returners and a lot of new athletes on the team. We've got a little mixture of experience and athleticism, and a really solid team, top to bottom. We are probably the deepest team that we've ever been."

The majority of the Flames' men's beach players are currently focusing on their indoor games and won't be traveling to Florida this weekend.

"The newcomers are adding a lot to our environment," she said. "It is definitely a family culture. We have a developmental team that we are working with this year that will hopefully feed into being on the roster next year. The returning group has a very solid foundation and they're able to pass that onto the newcomers."

"I'm really excited to be working with this group of girls," she said. "I love the opportunity that beach volleyball affords in doing off-the court activities. We've had a blast so far this fall."