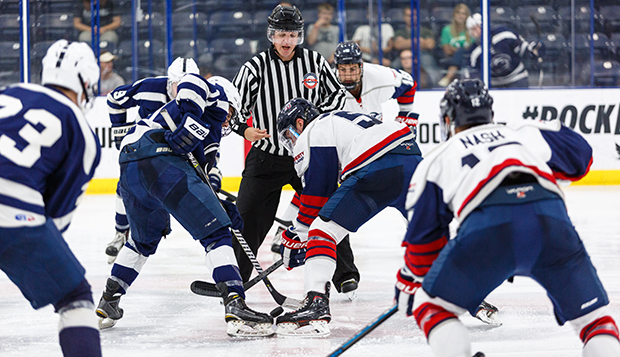 Flames sophomore forward Charlie Wilkie takes a faceoff in a game this season at the LaHaye Ice Center. (Photo by KJ Jugar)

In a weekend showdown at the LaHaye Ice Center between Liberty University's ACHA Division II men's hockey team, ranked second in the Southeast Region, and Sault (Ontario) College, the top-ranked team in the Central Region, the host Flames led once in the second period and twice in the third of Friday night's opener only to settle for a 5-5 tie.

"It was 3-3 going into the third period and then we went up 4-3 and then 5-4 and they tied it back up with 52 seconds to go," Flames Head Coach Ben Hughes said.

Then, in Saturday's rematch, Liberty gave up three unanswered goals in the third period of a 4-2 setback to slip to 12-2-2 on the season. The reigning ACHA Division III national champion Cougars, playing their first season at the DII level, improved to 11-2-1.

"It was a bittersweet weekend because I liked the way we played, overall, but we didn't finish what we started," Hughes said. "It was not a failure because Sault College is a No. 1 team in its region and we have a lot of respect for them. But there is a little regret when we walked away knowing that we would have, could have, should have won at least one of those games. There was just a little bit of a lack of execution."

Liberty's forward line of juniors Blake Flanders and Michael Niederer and freshman Luke McFarlane accounted for four of its five goals in Friday night's game and one of its two on Saturday.

"They definitely stepped it up this weekend and played a huge part in our success," Hughes said. "Altogether, they were a part of five of our seven goals, all scored at even strength."

Neither team scored a power-play goal over the weekend as they combined for just 14 penalties (six by the Flames) in two games. Sault's top two scorers, forwards Ryan Vendramin — who moved within one point of the ACHA DII scoring lead with 28 goals and 17 assists — and Max Khull, both scored two goals and distributed one assist in both games.

"We had a couple mistakes for sure, but they weren't necessarily defensive lapses," Hughes said. "We were watching the puck a little bit too much in our D (defensive) zone and Sault College, which was by far the best puck-moving team we've played against this year, capitalized."

Liberty outshot the Cougars, 40-29, in the opener, including 5-4 in the five-minute overtime period, and 35-31 in Game 2. Flames sophomore goalie Adam Peacock made 51 saves in the series while Sault's Justin Richer stopped 68 shots.

"It will be a good test for us this weekend and we are excited about it," Hughes said. "Rider is ranked fifth in the Southeast Region and it is always well coached and it is always a physical, intense battle against them. We are ready to get back to work."