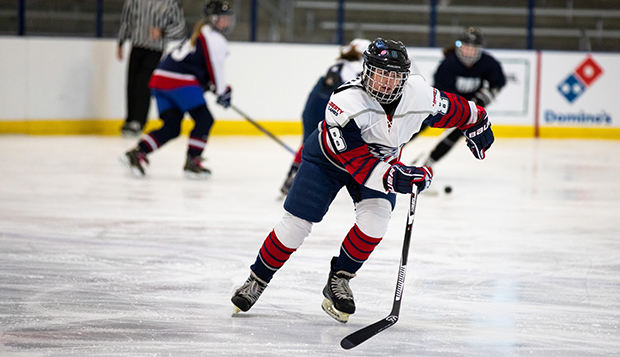 Sophomore defenseman Kiana Ziegler controls the puck in a game at the LaHaye Ice Center. (Photo by Jessie Rogers)

Junior forward Brittany Hegele scored the tying and winning goals for the Lady Flames in the third period of the opener against the host Lakers.

Just seven seconds after forward Hayley Vandepol finished an assist from Allisyn Arotin to lift Mercyhurst (3-3) to a 1-0 lead, Hegele netted the equalizer off an assist from junior defenseman Sarah LaPorte at the 12:37 mark. Then, with 2:28 to go in the third, Hegele converted the go-ahead goal, set up by sophomore defenseman Delaney Adams.

"It was a full team effort and everyone played well together," Liberty Head Coach Rena Leone said. "Everyone supported each other and they had some fun while they did it."

The Lakers outshot the Lady Flames, 42-33, and sophomore goalie Madeleine Snook made 41 saves.

Hegele eclipsed the 100-point mark for her career in Saturday's rout of SUNY Oswego, completing a hat trick in the first period and finishing with four goals and two assists. She was complemented by sophomore forwards Paige Arnosti, who also recorded a hat trick, and Hope Stengler, who scored twice along with junior forward Julia Hoffmeier and freshman forward Morgan Whitehorne, who also distributed three assists.

Senior defenseman Holly Turner contributed a goal and an assist in Sunday's 2-1 triumph over Buffalo. She ended a scoreless tie six minutes into the second period with an unassisted goal before the Bulls tied the contest early in the third period on an unassisted equalizer by Kelsey Bannister.

Finally, with 55 seconds remaining in regulation, Turner set up Arnosti for the game-winning goal.

"That will be a good challenge for the girls," Leone said. "We ended the semester undefeated in College Hockey East (CHE) league play and this weekend's games against Mercyhurst and Buffalo, while they are not in our specific division, should help our strength of schedule."