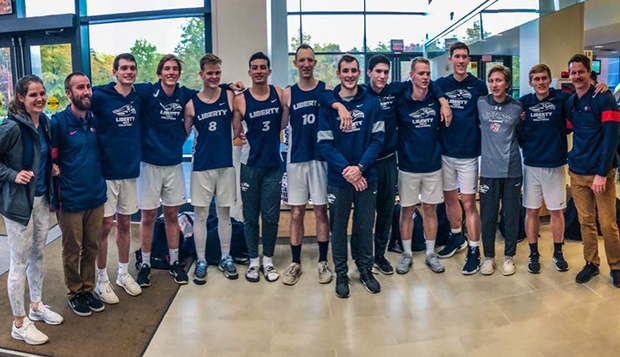 At its final tournament of the fall semester, Liberty University's men's volleyball team swept all six of the opponents it played in the George Mason University Fall Friendly on Saturday.

"It was mostly NCAA Division II and DIII teams who are just starting preseason practices for their spring schedules, we took care of business and played really well pretty much the whole day," Liberty Head Coach Kaleb VanDePerre said.

The Flames competed with their projected 11-man A team, which included sophomore setters Tommy Speelman and Tait Lapham, who also played libero on the back row.

"Tait played (defensive specialist) and libero the whole day and he rocked it," VanDePerre said. "He's the man. He's played so well."

At the net, Liberty used a balanced rotation that complemented one another well.

"We were super even," VanDePerre said, noting the Flames ran a 6-2 offensive formation, hitting by committee. "We didn't struggle much all day, but if someone was playing down, the rest of the guys were playing up."

Morton hit at a .728 percentage and had eight kills against EMU.

"That was incredible," VanDePerre said. "He also led the team in blocks."

Edwards and Reinsma both spiked a team-high 27 kills for the tournament. As a team, the Flames hit above the .300 mark and reached their passing goals for the day.

"The guys meshed really well," VanDePerre said. "We moved them around and they performed well regardless of what the circumstances were. Every line was producing, the setters spread the ball out well, we serve-received really well, and our middles blocked as well as we have all season. It was good to see them put it all together at the end of the semester."