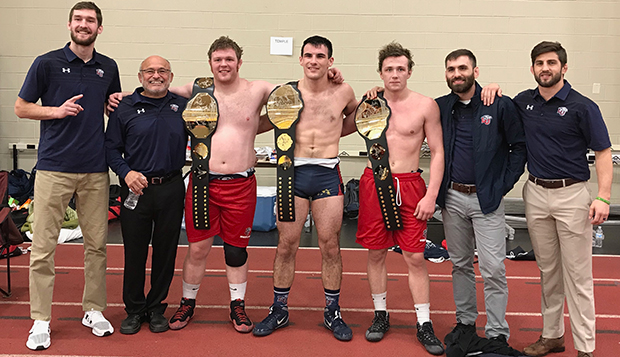 Liberty University's men's wrestling team racked up three first-place finishes — at 174 pounds, 197 pounds, and heavyweight (285), where the Flames also had the runner-up and consolation champion — at Saturday's Fall Brawl Invitational, hosted by Ursinus College in Collegeville, Pa., near Philadelphia.

There were no team scores kept in the tournament that featured primarily NCAA Division III schools from the Northeast, including host Ursinus, as well as four NCWA programs. The Flames were joined by their top Mid-Atlantic Conference rival, Apprentice School, as well as West Chester State and Temple.

Liberty entered 16 wrestlers in the tournament, but loaded up in certain weight classes and didn't have anyone competing at 133 or 141 pounds.

"Considering we wrestled seven weight classes and we competed against some pretty good competition, it was a very strong showing for the team," Flames Head Coach Jesse Castro said. "It was a good fight from our new guys again."

At 174, senior Joe Scott went 4-0, pinning Elizabethtown's Hunter Beaudet in 4 minutes, 40 seconds in their quarterfinal match before edging Apprentice's David McElravy in the semifinals, 4-3, and Worchester's Brendan Marion, 6-5, in the championship match.

"Joe Scott did an excellent job," Castro said, noting that he weighed in at 167.5 pounds. "He was giving up some weight, and struggling wrestling against heavier opponents."

He is happy to be back at Liberty after transferring to Washington & Lee for his junior year.

"This is where he's supposed to be," Castro said. "On and off the mat, academically, he's doing well. He's even smiling more."

Graduate Austin Amos, the Flames' two-time defending NCWA national champion, finished 5-0 at 197, pinning his first opponent and later scoring a 17-1 technical fall over Ursinsus' Malcolm Hunt in the semifinals before scoring a 7-2 decision over Navy Prep's Anthony Burburija in the championship bout.

Finally, at 285 pounds, Liberty cashed in with the top three place-winners. Junior defending NCWA national champion Jeff Allen struck gold with his 4-3 decision over freshman teammate and silver medalist Rick Weaver in the final. Previously, in the semifinals, Allen overcame sophomore teammate Josiah Murphy in overtime, 4-3, and Weaver recorded a 7-2 decision over Benjamin Maack from Ursinus. Both Weaver and Murphy finished 4-1 on the day, with Murphy defeating Ursinus's Theodore Blahos in the consolation semifinal, 5-1, and Elizabethtown's Keegan McCord by default in the third-place bout.

"That was quite a showing for our three heavyweights to finish 1-2-3," Castro said. "They were definitely tested by their own teammates and that was a battle between Allen and Weaver in the final."

Flames 157-pound freshman David Over and 197-pound sophomores Sean Gillespie and Blake Barrick each went 2-2 but did not place.

Liberty will compete with a split squad at next Saturday's Southeast Duals and Sunday's Star City Open at the Salem Civic Center, again wrestling against primarily NCAA DIII schools, but this time from the Southeast, including Virginia, South Carolina, and West Virginia.