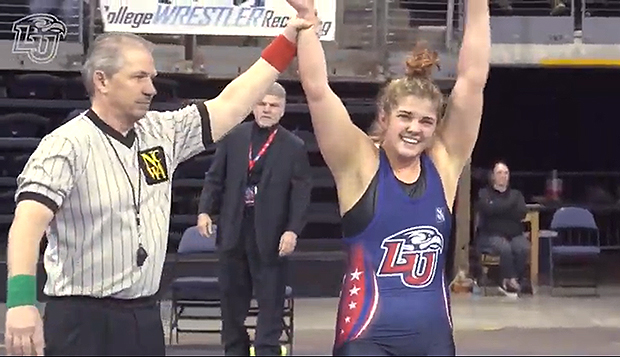 For the first time in the three-year history of Liberty University's women's wrestling team, the Lady Flames will have an opportunity to contend for an NCWA National Duals championship when they host that event on Jan. 24-25 at the LaHaye Ice Center.

While the Flames' men's program is four-time NCWA National Duals champions and became the first to defend its title last January near Las Vegas, that has not been an option for the Lady Flames, who finished fourth at the NCWA Women's Grand Nationals on the strength of individual champions Cendall Manley (170 pounds) and Charisse Manley (143 pounds).

"There probably won't be an enormous amount of women's teams entered, but it will be interesting to see," said Liberty Head Coach Josh McIlhenny, who was a captain for the Flames' men's team as a senior last season. "It will help grow the sport."

The Manley sisters have been model examples for their peers and mentors for younger women. Cendall is a senior shooting for her fourth consecutive crown — she won her first as a freshman before Liberty officially had a women's program — and Charisse is a second-year graduate student and team manager seeking her second title.

"Having them in the room is awesome," McIlhenny said. "They help a lot with techniques and drilling, and the pace they set and the attitude they bring is contagious. When they're working hard, it's been good to see the intensity rise, and they are all coming into this season ready to go."

He has been pleasantly surprised by the amount of interest among Liberty student-athletes in joining the women's team.

"We've added two new girls, Marissa Sanders, a sophomore at 136 pounds, and Rebekah Kemper, a junior at 191," McIlhenny said. "This is their first year wrestling for both of them, but having more people in the room training is always a plus and we are excited to have them as part of the team."

They expand the women's roster to nine, with as many as six expected to travel to Allen, Texas, for the March 12-14 NCWA Grand Nationals. Besides the Manley sisters, the Lady Flames feature seniors Jayla Ware at 109 pounds, Catherine Morales at 155, and Lisa Konawel at 235, as well as sophomore 130-pounder Maria Ferello and junior 191-pounder Kyndra Wooten.

"They're pretty evenly spread out," McIlhenny said. "We only have two girls that share the same weight, so we are filling the majority of the weight classes, which is exciting. We have returning girls on the team who are continuing to grow as wrestlers and others who have trained and are working toward competing at nationals."

The Lady Flames will open their season on Nov. 16, when they compete at the 2019 VBR Sports Southeast Duals at the Salem Civic Center. On the weekend before the inaugural NCWA Women's National Duals, the Manley sisters are planning to enter the Tornado Open on Jan. 19 at King University, a Women's Collegiate Wrestling Association (WCWA) program.

"It will be cool to see them compete at that one, wrestling against a more advanced level of competition," McIlhenny said.

The team has bonded off the mat through a variety of team activities, including a workout on the Hydaway Outdoor Recreation Center's high-ropes challenge course two weekends ago.

"That was fun to see the girls overcome some stressful situations and grow together," McIlhenny said. "It was a good weekend for us to spend time as a team outside of the wrestling room. Spiritually, we have team devotions every Friday and are trying to keep the team centered on Christ. That's our goal, ultimately, to glorify Him through wrestling."