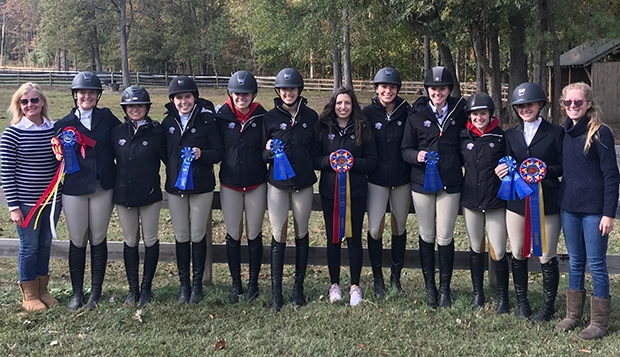 The Lady Flames totaled 39 points to edge runner-up Randolph Macon College (37 points) and move into first place in the Region 4 standings at the midpoint of the season. Through seven shows, Liberty has accumulated 148 points to surge ahead of Sweet Briar College (132), followed by RMC (118) and William & Mary (113).

Individually, junior Brooke Boan was the High Point Champion rider for the day after landing first-place finishes in both the Limit Flat and Limit Fences divisions. Senior captain Amber Gayheart captured a blue ribbon for her ride on the Open Flat and a red ribbon for her second-place showing in the Open Fences division to be named the Reserve Champion High Point rider.

Other first-place finishes by the Lady Flames were awarded to sophomore Juliana Gorena in the Limit Fences category, freshman Lydia Lambdin in the Novice Flat event, and junior Alyssa Rose in the Introductory class.

Liberty will return to the Richmond area this weekend for its final two shows of the fall semester, hosted by Virginia Commonwealth University on Saturday and Sunday at Stillmeadows Farm in Mechanicsville, Va. On Nov. 16, the Lady Flames' Western team will host its first-ever show at the Liberty Equestrian Center.