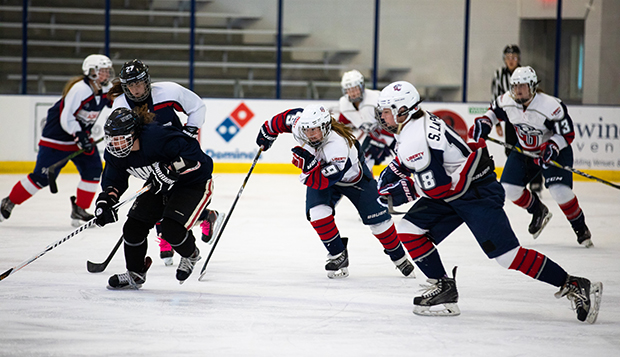 Sarah LaPorte (18) scored the game-winner against Mercyhurst on Friday and Paige Arnosti (13) netted the first goal against Navy on Sunday. (Photo by Jessie Rogers)

The Lady Flames exacted a measure of revenge against Mercyhurst with a 3-2 triumph in Friday night's opener. The Lakers edged Liberty in last year's College Hockey East (CHE) North-South Showcase on their home ice in Erie, Pa., which earned the CHE's autobid to the ACHA DII National Championships in Frisco, Texas.

Mercyhurst ended a scoreless tie midway through the second period, beating Lady Flames sophomore goalie Madeline Snook with a putback from near the right post. Liberty responded 14 seconds later, however, when senior forward Brittany Hegele received a short pass from sophomore Paige Arnosti and skated up the left wing before maneuvering through the Lakers defense and tucking the puck past goalie Alexandria Lapietra inside the left post.

With 3:23 left in the second, Mercyhurst reclaimed the lead and held it for more than 18 minutes before Hegele again netted the equalizer, this time with a howitzer of a shot from the left circle through two Lakers defensemen into the top-right corner of the cage with 5:13 remaining in regulation.

Finally, at the 2:08 mark, Lady Flames junior defenseman Sarah LaPorte launched the game-winner from the high slot, again using Mercyhurst defensemen to screen the goalie and ripping a shot into the top-right corner.

Liberty outshot the Lakers, 47-46, for the contest and both Snook and Lapietra made 44 saves to keep the contest close throughout. Mercyhurst (2-1) had outscored Pittsburgh by a 25-5 margin in a season-opening sweep.

After holding off the Hurricanes with a 5-4 win on Saturday, the Lady Flames pulled away from the CHE Southeast Division rival Midshipwomen on Sunday afternoon 4-1 in a rematch of last season's CHE championship game. Arnosti started the scoring at the 18:15 mark of the second period with a shot off the glove of Navy goalie Shannon Hart, assisted by senior defenseman Holly Turner.

Hegele extended the lead to 2-0 with a wraparound shot into the upper netting off sophomore defenseman Delaney Adams' assist from behind the cage with 4:04 left in the period. Then, with 19:12 to go in the third, Hegele netted her second goal by lifting a wrist shot from the right circle into the top-right corner of the cage for a 3-0 advantage.

The Midshipwomen ended Snook's shutout bid with 3:37 remaining in regulation when Lauren Power sneaked a putback of Maggie Madigan's shot through the five hole. But the Lady Flames responded just 34 seconds later when Arnosti weaved around Navy defenseman Isabelle Ross and flicked a shot over Hart for the final score.

Liberty outshot Navy, 52-31, and Snook made 30 saves in her second win over the weekend, lowering her goals-against average to 1.50 and raising her save percentage to 96.1.

The Lady Flames will travel to Pennsylvania this weekend to play Rochester Institute of Technology (RIT) on Saturday at 7 p.m. and the University of Pittsburgh on Sunday at 11:20 a.m.