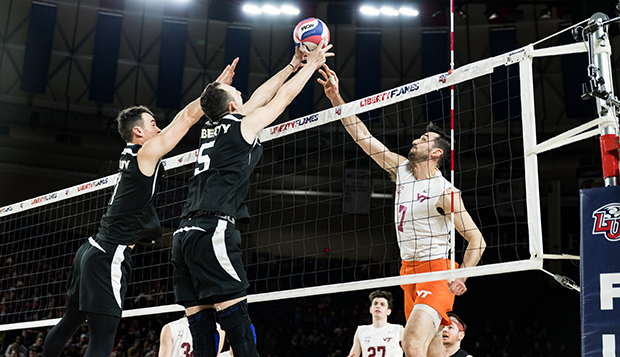 Both Liberty University's A and B men's volleyball teams advanced to the gold bracket of Saturday's Virginia Tech Fall Invitational and played the eventual champion Penn State A squad to extra points in narrow defeats.

The tournament featured 16 teams — three from the host Hokies, who also entered an alumni team; two each from Liberty, Penn State, Virginia, and West Virginia; and one from Elon, ODU, Navy, and South Carolina.

"Overall, we were proud of our effort and progress," Flames first-year Head Coach Kaleb VanDePerre said. "I was really glad to see how we conducted ourselves most of the day in tough, competitive situations, showing mental toughness. We need to keep serving tougher and our defense needs some work (but) we will continue to get better each day."

The two Liberty teams were basically an even split of its top players, who met head-to-head in an extremely tight intra-squad scrimmage last week to determine which would be designated the A team.

"Practices were wildly competitive and over the course of the past two weeks, both teams showed major growth, with one battling to a 36-34 victory," VanDePerre said.

On Saturday, Liberty's A team won its pool with sophomore setter Tommy Speelman running a 5-1 offense with junior Sean Taggart and sophomores Lincoln Bergey and Cody Reinsma as his main options at the outside and opposite hitter positions and sophomores Luke Marine and Gavin "Goose" Gossage rotating at the middle hitter spot. The Flames swept Virginia Tech's C team and WVU's B team and split with PSU's B squad before rallying from a game down to win its playoff opener over the Hokies' B team in three and losing to the Nittany Lions' top lineup 25-22, 26-24.

"Sean and Cody had 40 and 37 kills, respectively, for the tournament and were playing well once the day got going," VanDePerre said. Luke and Goose were solid both ways for us in the middle and Lincoln was really consistent offensively at outside hitter and from the service line. (Sophomore) Tait Lapham, our libero, passed at an unreal mark and allowed Tommy to spread the wealth offensively. He was playing really confidently and getting all of our attackers involved."

Speelman also had the Flames' best serving performance with a total of eight aces on the day.

Meanwhile, Liberty's B team experimented with a 6-2 formation with freshman Chase Keith and sophomore Josh Knapp alternating as setters, sophomores James Morton and Cross Edwards platooning at the outside hitter position, and Knapp and Ian Davis rotating at the right side hitter spot. Sophomore Ben Dowd and freshman John Sauder platooned at middle hitter and junior Bran Anderson and sophomore Tommy Otte shared reps at libero.

"After dropping a rough match to Virginia Tech, where we passed really poorly and put ourselves in tough situations against a solid team, we bounced back and played the best volleyball of the day against eventual champion Penn State," VanDePerre said. "James and Cross passed really well and each finished with around 30 kills. Josh and Chase spread the ball around well and Chase continued to impress with his confidence and decision making."

He said Knapp hit and blocked efficiently in the playoff match and both Anderson and Otte got some excellent reps running the defense.

"Ian blocked well in just his second tournament and John and Ben scored at crucial times out of the middle," VanDePerre said. "It was tough losing early in the playoffs but reminded us how important it is to perform during pool play to set up a good seed."

The Flames have less than two weeks to prepare for the Nov. 9 tournament at George Mason, where they will compete against some of the top NCAA teams on the East Coast.

"The growth that all of the guys have shown is really promising and I am pumped to announce the 11 man travel roster for GMU this coming week," VanDePerre said. "We are going to continue to figure out who plays best where." 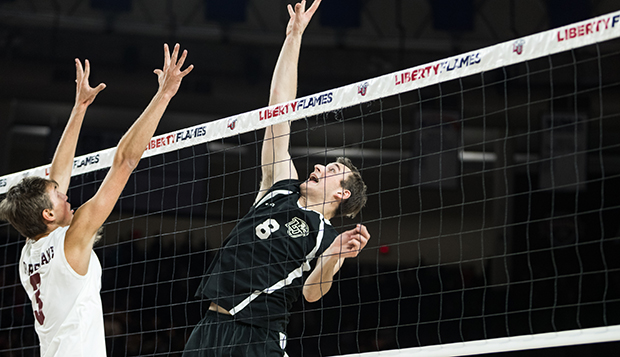