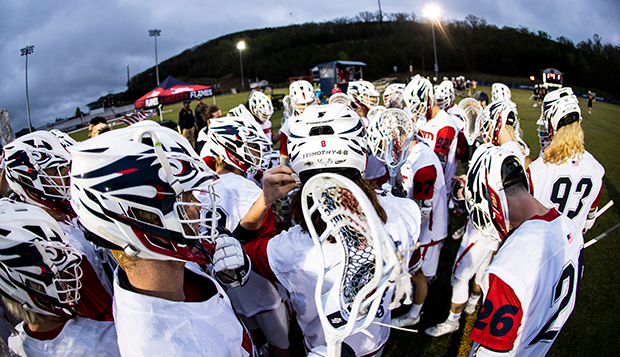 The annual Liberty University men's lacrosse alumni game —pitting the 36 current Flames team against a ragtag ensemble of 30 returning players from the past 35 years — was more competitive than ever before on Friday night at the Liberty Lacrosse Fields.

It was one of several Athletics and Club Sports alumni contests played around campus over Homecoming Weekend.

Liberty's alumni team opened an early 4-3 lead before this year's Flames scored the next six goals to seize a 9-4 advantage. The contest was tied at 12-12 before the present-day players netted the game-winner late in regulation and celebrated the hard-fought victory with a tailgate party open to all who were in town for Homecoming Weekend

"Obviously, as the program continues to develop and grow, that alumni team's going to get better and better," Liberty Head Coach Kyle McQuillan said. "There were quite a few guys back from recent years, including Brayden Harriman in net, attackmen Chris Armstrong and Ryan Miller, and (Club Sports Hall of Fame inductee) Jeremy Kortright (at midfield).

"It was good to see the guys come together," he added. "It was a good event and we're happy to bring people back to campus and showcase the growth of our program. It was great to tailgate after the game with present and past players and their families and friends."

"This is our last full week of practice before we scale things back a little bit," McQuillan said. "We are excited to finish out fall ball with the game against Virginia Tech. The VMI game gave the guys some confidence. We're definitely going to get a better litmus test of where we stand on Saturday."

The Flames' coaching staff will continue to assess their returning players and newcomers and experiment with different combinations and on-field formations.

"For us, it's an opportunity to compete," McQuillan said. "Hopefully, we've got the guys in the right spots and it will confirm some things we already know, or, if we need to make some changes, we will be able to do that as well."

He is eager to see what the Hokies bring to the table with a new coach, former Sonoma State Head Coach Panchito Ojeda, and a large influx of new players.

"Tech's got a large team, a young and talented team with only one senior," McQuillan said. "I am excited to see the new look and what things are similar and what are different."

He is mainly interested to watch how his players respond to the best competition they'll face this fall, aside from their own alumni team.

"We lost some key players last season, and have some big shoes to fill, but we've been really pleased with how guys have stepped into those positions," McQuillan said. "We had a few guys that took their offseason training opportunities pretty seriously and have come back to us much improved. There are still questions about where they'll land on the depth chart."

Saturday's showdown should help answer those questions, 100 days before the Flames open their Spring 2020 season at another SELC Northwest Region opponent, Tennessee on Feb. 8.