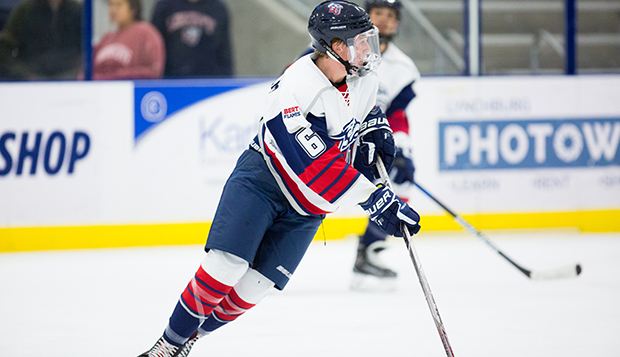 After sandwiching series splits with George Mason and ACCHL Patriot Division rival Coastal Carolina around a 4-2 loss to Virginia to start the season, Liberty University's ACHA Division III men's hockey team moved back above the .500 mark at 4-3 with a resounding 19-0, 10-0 sweep of Northern Virginia Community College on Saturday and Sunday at the LaHaye Ice Center.

"NOVA is in its first year in our conference and it was a fun game to get the confidence up for a lot of guys," Flames Head Coach Jared Smith said. "We were able to focus on working on our systems."

Junior wing Scott Chisholm netted a hat trick in Saturday's opener and freshman goalie Stephen Sanders made 10 saves to post a shutout in his first start. On Sunday, fellow freshman Michael Moore made his first start and also recorded his first shutout, though he only had to make seven saves.

"We gave two of our new goalies a shot, and they both got shutouts," Smith said. "Though they didn't get tested much, they were playing the puck a lot, coming out of the net and passing it around, so they were getting their touches, too."

The Flames, who are now 3-1 in ACCHL Patriot Division play, are off this weekend before traveling to face the fourth and final Patriot Division opponent, Christopher Newport University, for a series on Nov. 1-2.