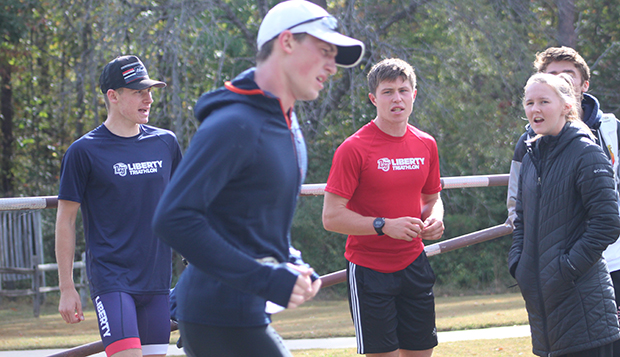 "I go to their meets and cheer them on, so it was really encouraging to have them come up and cheer me on, too, in a role reversal," Fairley said.

After placing 13th in his second Olympic-distance race in the morning, which started with a 1500-meter swim, followed by a 40-kilometer cycling stage and 10K run, Fairley completed the 750-meter swim, 20K bike ride, and 5K run in 55 minutes, 18.1 seconds to finish runner-up to the Naval Academy's Adam Estroff (55:06.6).

"The draft-legal race was amazing," Liberty second-year Head Coach Heather Gollnick said. "Mark was in a group of four guys quite a ways behind the lead pack, but they bridged that gap by the time they got to the second lap and it came down to him and three other guys who were just hammering the run. It was so exciting."

Fairley, who is pursuing a graduate degree in sport management, ran cross country and track at a small college in Iowa and swam in high school, but has never cycled competitively.

"My best event was probably the steeplechase, which was a lot of fun and a different challenge, as I see triathlon as a new, fun challenge," he said. "I love it. It's been a blast and I've learned a ton. My dream is to be a college coach, and who knows? Maybe triathlon will be a way to get there."

Fairley has blossomed in the sport under the guidance of Gollnick, with sophomore Max Galbraith giving him plenty of incentive to improve his times in the three phases.

"It was motivating to have people to catch and it's always nice to have Max to try to push me faster, too," he said. "Max and I get along really well. In the three months I've known him, we've built a good friendship and a healthy competitiveness. He's definitely motivated to catch me on the bike as soon as he can and I'm motivated to try to make up some time on the run if I can, too."

Fairley said Saturday's race experience was excellent preparation for nationals, which will be held on an Olympic-distance course in Tempe, Ariz.

"I hope this winter we'll get some good practice on the bike so that isn't as much of an Achilles Heel for me in future triathlons," he said.

He finished four seconds in front of Queens (N.C.) University of Charlotte's Sebastian Rivera and well in front of Alexander Mundt, who won the morning's Olympic-distance race.

"That was exciting for him for sure," Gollnick said. "It usually takes a few seasons for someone to pick up a new sport and be that competitive. I think by the time nationals comes around, it'll be different. Instead of nine weeks, he'll have five or six months of biking experience."

"I wasn't top 10, but it was still a good race for me against very high competition," said Galbraith, who won the first Olympic distance race of the season, the Sept. 21 Giant Acorn at Lake Anna State Park.

He said the course was more technically difficult and hillier, with race temperatures in the upper 30s at the 8 a.m. swim start making it all the more challenging.

"I didn't start feeling really cold until about seven miles into the cycling stage and then, coming off the bike, I couldn't feel my feet on the run," Galbraith said.

"Getting on the bike when you're wet and it's 38 degrees is a little cold," Gollnick added. "We compete in Florida and Arizona (in the spring so) and this ends up being one of the colder races we'll do."

"We have a young team and for half of our athletes, this was their first full Olympic distance race," Gollnick said. "Now we will shift gears and go into a strength-building phase, which will be great for the newer athletes, and some technique training which will help them for the spring semester."