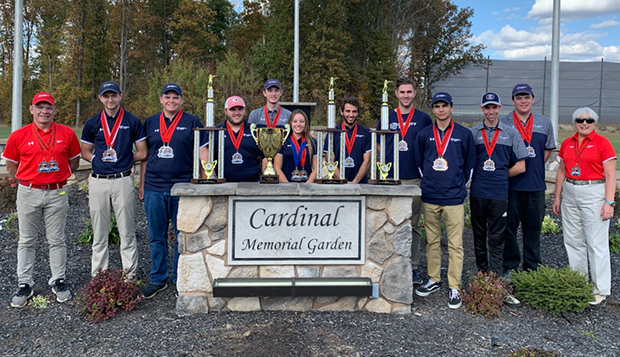 The Flames' and Lady Flames' 10 competitors shot at 200 targets in each discipline, totaling 600 targets over a three-day period, and placed second in sporting clays, American skeet, and American trap. They finished behind only Hillsdale (Mich.) College and ahead of third-place Purdue University in the competition held at the Cardinal Shooting Center in Marengo, Ohio.

"We had a good showing for our first year competing at the SCTP Nationals," Liberty Head Coach Dave Hartman said. "It was not yet as big the ACUI (National Championships in San Antonio, Texas) but it's growing every year."

Davis and Hendrix competed at the same shooting center for SCTP open championship events held over the summer.

The shotgun team will next send split squads to Lexington, Va., for the James Madison University Invitational, and Belton, S.C., for the Bob Jones Invitational Scrimmage on Nov. 2, before heading back to Glenn Dale, Md., on Nov. 9 for the ACUI Upper East Coast Regional Championship at the Prince George's Trap & Skeet Center. The Flames and Lady Flames are defending champions at that event and returned to that facility on Sept. 20-21 to win the Collegiate Division of the Terrapin Classic.