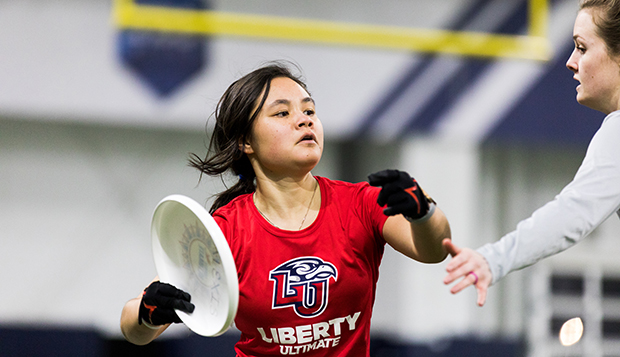 Liberty University's women's Ultimate team entered a split squad and competed against two teams from Virginia Tech and VCU as well as The Townies, a Lady Flames alumni team, on Saturday and Sunday in the fall season-opening LUWU Invite, a round-robin tournament at the Liberty Lacrosse Fields.

The Lady Flames' top squad went 4-2 to finish tied with the Hokies for second place behind a Townies team that went 6-0 in games to 13 points or 75 minutes, whichever came first. Both Liberty's and Virginia Tech's second teams were 3-3 while VCU's two squads finished 1-5 and 0-6.

"It was a phenomenal weekend," Lady Flames Head Coach Jonathan Mast said. "It was surprising how much they learned in a two-day timeframe. Every single person contributed, from the brand new rookies who had never played before to our returning starters. Both me and (Assistant Coach) Ashley (Mast) were really encouraged to see how much they grew and it gives us a really good idea of what kind of work we need to put in to be successful in the regular season."

He said the tournament allowed him to see his players' strengths and weaknesses and experiment with them in different positions and player combinations.

"It was a very casual tournament but very valuable for developing a game plan for individual players to use throughout the season," Mast said. "We have returners stepping into new roles, and new leaders on the teams and these low-pressure games were so helpful in getting them confidence and chemistry. We were using this tournament as an experiment to see moving parts in our offense and as a team overall, the biggest thing we took away was seeing who works well doing what."

"Bethany Fowle is normally a cutter, but we are making her more of a hybrid player this season to give her more touches on the disc," Mast said, noting that in addition to playing defense, as she normally would, she did some handling as well. "AnnaMarie let loose with high risk shots, which are not normally her forté, but it turned out to be the best part of our offense. Bethany was unstoppable in the end zone on all of our deep shots. It was almost comical with how well it worked, particularly on Sunday. Teams would call time out to find ways to double team her and they still couldn't stop her."

Both Fowle and graduate Victoria Dissmore, who played on the other Lady Flames team, are both deep threats, but they finished with more assists than scores.

"That disc is going to be in their hands a lot, so I wanted them to catch the deep pass and make the next five- to six-yard pass (into the end zone)," Mast said.

Sunday's showdown between the two Liberty teams was shortened to one half and capped at 7. Tied at 6-6, the Lady Flames' Y team defeated the X team on a long heave from Hagerty to Fowle, who assisted junior Alexis Boykin on the game-winning goal.

Liberty will send only its travel team to its next tournament, the Nov. 2-3 Blue Ridge Finale, a USA Ultimate-sanctioned event at the Smith River Sports Complex in Martinsville, the site of the Atlantic Coast Regional Championships.

"There will be 16-17 teams there, including some stiff competition, so it will be exciting to see what happens," Mast said. "I am confident our travel roster can handle it."

The field will include teams from the University of Virginia and the College of William & Mary, as well as others from as far away as New Jersey and Pennsylvania.

"It will be nice to play it there, so that we will be familiar with the complex and not be overwhelmed when they return there for regionals," Mast said.

Liberty will also travel to a one-day round robin tournament in Richmond on Nov. 9, when Mast will bring his travel and practice squads and divide them up into A and B teams.