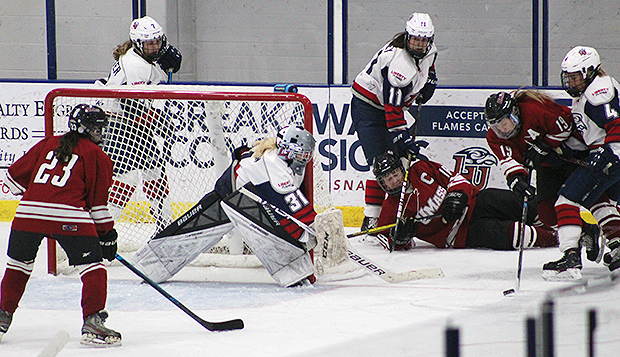 The Lady Flames (3-1) struck first with 3:42 remaining in the first period when Alex Smibert put away an assist off a faceoff win by fellow senior forward Vanessa DeMerchant.

"It was nice to see Smibert get one," Liberty Head Coach Chris Lowes said. "Just quick release, right off the draw. That was classic Smibert."

After nearly 20 minutes of scoreless action, UMass answered with the equalizer when sophomore forward Kat Nikolopoulos finished an assist from senior forward Juliana Dolan past Lady Flames freshman goalie Kayla Savoie-Penton at the 2:50 mark of the second stanza.

"UMass played better than last year," Lowes said. "They had lots of energy. They were fired up."

Early in the third period, Liberty got the go-ahead goal and quickly pulled away from the Minutewomen. Valeriia Manchak skated through the left circle and put a shot on net that UMass goalie Casey Marshall blocked. However, fellow freshman forward Yannick Truter charged through the right crease and batted the loose puck out of the air into the back of the net for a 2-1 lead at the 18:33 mark.

Just over a minute and a half later, Truter received a pass from Manchak and sent a shot from deep in the left circle through traffic past Marshall for a 3-1 advantage with 16:57 remaining in regulation.

"After the second period, we decided we need to bring up some energy and get up together and support each other and the team just woke up," Manchak said. "We understood that we needed to put hard work and dedication out on the ice … and everything got better and we started to score."

DeMerchant all but put the Minutewomen away midway through the third period by skating the puck out from behind her own goal and weaving between UMass defensemen as she accelerated through the center of the ice before lifting a wrist shot over Marshall's glove, stretching the advantage to 4-1.

"Vanessa picked it up behind the net and went the whole 200 feet, split the defensemen and when she gets up to speed, she looks fast," Lowes said.

Junior forward Shelby Bradford capped the scoring with 3:36 left in the third by deflecting senior defenseman Dana McLeod's shot from the high slot past Marshall while posting up in the left crease.

"She was working hard and deserved that goal," Manchak said of Bradford. "She brings a lot of positive energy to our line and we enjoy playing with her.

"It was a tough game and it shows we can battle and step up," she added. "It was a great job by the coaches. They were supporting us the whole time and helped motivate us. Everybody deserves this win."

Liberty outshot UMass, 45-14, and Savoie-Penton made 13 saves in her second win in place of injured senior Nadia Rupoli, who may start Sunday's 9 a.m. rematch back at the LaHaye Ice Center.

"We're going to come out (Sunday morning) and hopefully play like we did in the third (period on Saturday) and just kill their energy right from the start," she said.

That will be the second of four consecutive matchups with the Minutewomen, who will host the Lady Flames next Thursday and Friday in Boston.

"We kind of had to step it up another notch because they surprised us and we weren't completely ready for the level that they came out at," Savoie-Penton said. "Hopefully, we can really prove to them what kind of a team we are so that when we go up there, they will know that we're coming to play our best game and they're going to have to battle really hard to beat us." 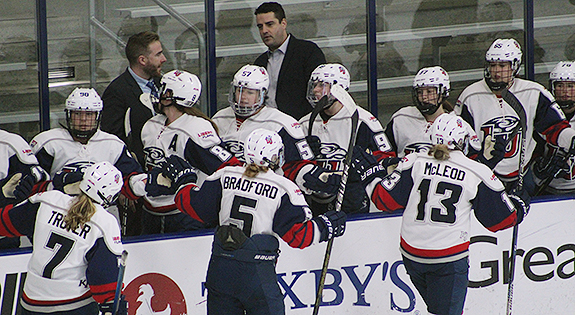