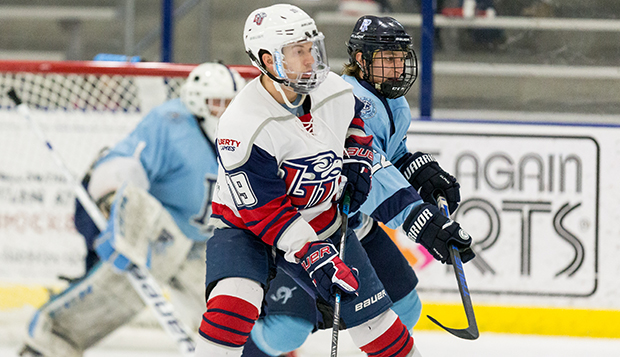 "It was a great game, and the turning point was definitely scoring three goals on the five-minute power play," Liberty Head Coach Kirk Handy said. "We didn't have a great start, but we finished well. We were 4-for-4 on the power play, including those three on the five-minute. That was the big difference maker tonight, for sure."

Senior defenseman Chaydan Lauber scored for the Flames at the 15:28 mark of the opening period, finishing a feed from graduate forward Zechariah Roberts. Rhode Island responded right away with a power-play goal of its own — the Rams' only conversion in three extra-man opportunities — 36 seconds later, tying the game at 1-1.

Sophomore forward Matt Bartel lifted Liberty to a 2-1 lead that it would not relinquish with the Flames' first power-play goal with 6:42 remaining in the second, capitalizing on assists from senior defenseman Garrett Nelson and sophomore forward Josh Fricks.

The Rams picked up the five-minute major with 4:45 to play in the second period, enabling the Flames to open the floodgates. Roberts finished the first, off assists from senior forward Quinn Ryan and senior defenseman Jacob Fricks with 2:08 left. Bartel netted his second score 18 seconds later, set up by Josh Fricks, before senior forward Brock Thompson completed the scoring flurry off assists from Ryan and Jacob Fricks with 1:09 to go.

Roberts converted his second score off Ryan's third assist at the 12:49 mark of the third period before senior forward Andy Clarke capped the scoring by finishing a feed from senior defenseman Basil Reynolds.

Sophomore goalie Tyler Myers gave up his first goal in three starts, but made 18 saves to post the win.

He will start Saturday's 7 p.m. rematch back at Boss Arena.