Men's lacrosse pads roster to 37, preps for scrimmage at VMI 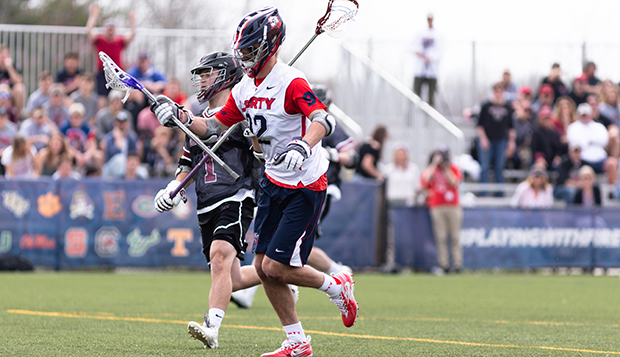 Senior attack Caleb Britton fends off a USC player in a 12-11 win March 30 at the Liberty Lacrosse Field. (Photo by Luke Bobbey)

Bolstering a roster that includes 21 returning players and eight recruits, Liberty University's men's lacrosse team added a handful of recruited walk-ons and picked up three transfers this fall. The Flames will open fall season play by traveling to Lexington, Va., to challenge VMI's club team on Sunday at 3 p.m.

"It will definitely be a different group from last year," said Head Coach Kyle McQuillan, who finalized Liberty's 37-man roster during tryouts in September. "We have been working hard and trying to find our stride and identity over the past few weeks of practice before facing our first opponent this weekend."

"He's going to be a guy who can come in and make an impact right away, bringing in good experience from PBA," McQuillan said. "He has a little bit of a different style than Ryan, but he is definitely a very, very talented player. Physically, he is a little bigger and more physical than his brother was."

Two other transfers who made the team as sophomore walk-ons are Ethan Bohannan, a 6-foot, 3-inch, 205-pound midfielder/faceoff specialist from NCAA Division II Tusculum (Tenn.) University, and Nick Ehrhardt, an attack from Potomac State (W.Va.) College.

McQuillan has been impressed with the preseason progress shown by returning and incoming players alike.

"Our main focus has just been getting the guys into the schedule of practice and lifting and team meetings," he said. "We are implementing a lot of systems and fine-tuning fundamentals. We are still changing so much around, moving people from attack to midfield and vice-versa. This weekend will be a critical step on how we move forward."

After taking on VMI for the first time since its program's infancy back in the 1990s, Liberty will welcome back many of its alumni from the past 25 years when it hosts its annual Alumni Game over Homecoming Weekend on Oct. 19 at the Liberty Lacrosse Fields.

"Every year it seems to grow, which is obviously a byproduct of adding more alumni each year," McQuillan said. "A concern to our current team is how much better the alumni team gets every year. We try to have fun with it, but it should definitely be a competitive game."

This year's contest will be a reunion of sorts for the Miller brothers.

"Ryan will be playing, which will provide some added motivation," McQuillan said. "That is a built-in rivalry we're going to be able to feed off of."

The Flames will conclude their shortened fall season with a scrimmage at SouthEastern Lacrosse Conference (SELC) rival Virginia Tech on Oct. 25.

"We always ramp up the for the Virginia Tech scrimmage, which will give us a better understanding of how we should stack up this (spring) season," McQuillan said.

Liberty, which finished 16-2 last spring, was ranked second out of 19 teams in the SELC preseason coaches poll, behind only defending SELC Tournament and MCLA Division I National Champion South Carolina (21-2). The Flames' only losses last season were to the Gamecocks, who received seven of 12 first-place votes.