Flames back on road for first ESCHL series at Rhode Island 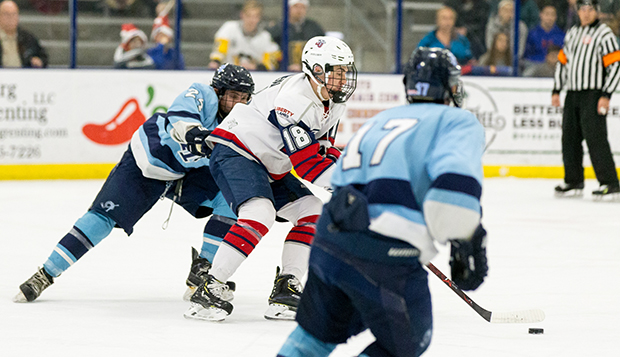 After a successful road trip to Alabama last weekend, Liberty University's ACHA Division I men's hockey team ascended two more rungs in the second national rankings this week, moving into a tie for fifth place with Iowa State. It is the Flames' highest peak in the polls since it appeared at No. 5 in last season's fourth ranking period on Oct. 24, 2018.

Liberty will begin a quest for its third consecutive Eastern States Collegiate Hockey League (ESCHL) regular-season title — and autobid to the ACHA DI National Championships set for March 19-24 near Dallas — with this weekend's series at Rhode Island. The 2012 ACHA DI national champion Rams have only defeated the Flames once since Liberty joined the ESCHL in 2016.

All-Time Series: Liberty leads 12-0-1 after splitting overtime decisions last Feb. 1-2 at Rhode Island, dropping the opener, 4-3, before salvaging a split with a 6-5 victory.

Liberty scouting report: Even with a short-handed attack due to injuries, playing without four of their 15 forwards, the Flames managed to produce an abundance of goals in their 6-0 and 8-3 wins to sweep Alabama last weekend in Pelham, Ala. Liberty features nine multiple-goal scorers and has now outscored its first three opponents by a combined margin of 41-6.

Rhode Island scouting report: Despite splitting a series at Buffalo last weekend and dropping one position in the polls, the Rams are one of five ESCHL teams ranked in the top 25 this week (Liberty, No. 13 Stony Brook, No. 18 Syracuse, and No. 25 Delaware, which makes its debut after a 5-0 start, are the others).

Chad Stone is Rhode Island's only multiple goal scorer with four goals and one assist through four games, while fellow forward Jake Salisbury is the team's point leader with one goal and five assists.

Coaches: Kirk Handy is in his 20th season as Liberty's head coach and has compiled an overall record of 437-180-29. Rhode Island is led by Joe Augustine, the only coach in the ESCHL with a longer tenure than Handy, and he has amassed a 642-308-64 mark in his 31st season at the helm.