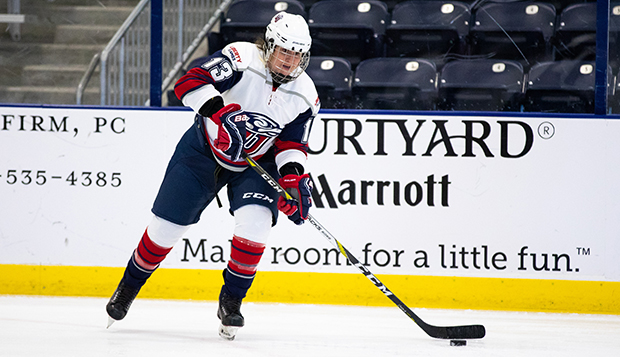 The Lady Flames outshot the Blue Hens by a 61-15 margin in Saturday's opener, but needed a hat trick from Arnosti and four assists by senior forward Brittany Hegele to pull out a 7-4 victory. Liberty outscored Delaware, 2-1, in the first and third periods and 3-2 in the second. Arnosti, who scored once in the first and twice in the second, added two assists, setting up Early's second and goal in the third. Sophomore forward Hope Stengler and senior defenseman Holly Turner netted the Lady Flames' final goals in the second and third periods, respectively, both assisted by Hegele.

In Sunday afternoon's rematch, the Lady Flames overcame a 3-1 deficit with four goals in a span of five and a half minutes in the second period before adding an insurance goal in the third for a 6-4 triumph.

Stengler scored Liberty's lone first-period goal with 4:25 remaining, and Turner tied the contest at 3-3 with back-to-back goals less than a minute apart at the 6:57 and 5:58 marks in the second. Hegele lifted the Lady Flames to 4-3 and 5-4 leads with consecutive scores, with the first off an assist from Early, and Early capped the scoring with the sole unassisted goal in the third.

Senior Brynlee Anderson started both games in goal for Liberty, making 11 saves in the opener.

The Lady Flames will be back in action Oct. 25-27, when they host Mercyhurst, the North Carolina Junior Hurricanes, and CHE rival Navy at the LaHaye Ice Center.