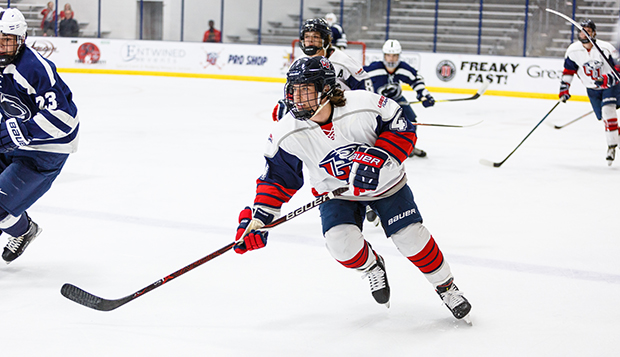 The Flames (6-0), who lost to the Nittany Lions in the past two Mid-Atlantic Collegiate Hockey (MACH) championship games, staged a 4-0 shutout in Friday's first game before holding on for a 3-2 victory in Saturday's rematch.

After a scoreless first period in the opener, Liberty capitalized in the closing seconds of a power play at the 17:31 mark in the second period when junior forward Michael Niederer sent a backhanded assist through the goalie box to sophomore forward Timothy Doe for a point-blank finish and 1-0 edge.

Less than two and a half minutes later, Niederer stole the puck back in the offensive zone and sent a beautiful back-door pass to Doe deep in the right crease where he one-timed a shot over sprawling Penn State goalie Jack Breen into the back of the net for a 2-0 Flames advantage.

Luke McFarlane stretched Liberty's lead to 3-0 with 4:54 left in the second by rifling a shot from the top of the left circle off a faceoff from fellow freshman forward Jaime Ross.

Doe and Niederer teamed up for a third time for the Flames to cap the scoring at the 15:50 mark when Doe pressured the puck behind the Penn State cage, forcing a turnover right to Niederer in front. He stopped it with his skate before slapping a shot over the shoulder of Breen for the final score.

Penn State started the scoring on Saturday and ended Cyhaniuk's 201-minute shutout streak with 15:24 left in the first period when Adam Alavi put away a diving crossing pass from the right end line. Liberty knotted the score at 1-1 just over 10 minutes later when sophomore forward Charlie Wilkie sent an assist from the back boards to Payton Nash who sneaked a backhanded shot from a sharp angle in the right circle through traffic at the 5:12 mark.

The Nittany Lions leaped back into the lead with 5:04 left in the second period when Joe DeLaurentis pounced on a loose puck deep in the left circle and one-timed a shot past Cyhaniuk for a 2-1 advantage.

Liberty netted the equalizer at the 14:17 mark of the third period by capitalizing on a three-on-two break with Niederer sending a spectacular cross-crease assist onto the tape of junior forward Blake Flanders' stick for an easy putaway.

Less than two minutes later, the Flames tacked on the game-winner by finishing a two-on-one fast-break opportunity when sophomore forward Justin Barstead intercepted the puck and skated it up the left boards before feeding a crossing pass to Doe in the inside edge of the right circle for a top-shelf wrist shot.

Liberty will return to the LaHaye Ice Center this weekend for its Fall Showcase when it will host UMass-Lowell on Friday at 6:30 p.m., Metropolitan State University of Denver on Saturday at 7:30 p.m., and North Carolina State on Sunday at 2:30 p.m.