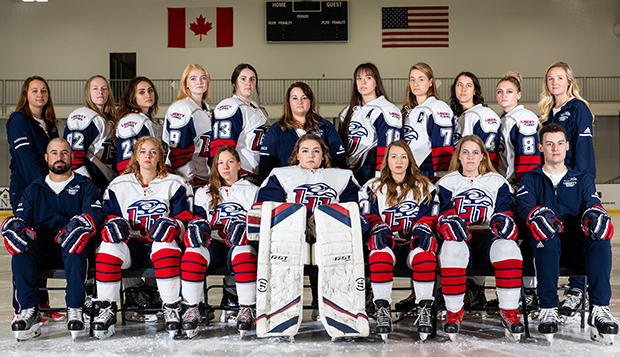 "The team is looking great," Lady Flames' second-year Head Coach Rena Leone said. "The girls are getting along, doing a lot of team bonding outside of the rink. So right now, team spirit is high."

Liberty is coming off its first College Hockey East Tournament championship, beating the Blue Hens 5-1 in the final, and is looking to earn its second bid to the ACHA Division II National Championships in three seasons.

"Last year, winning the College Hockey East was a great end to the season," Leone said. "Now, we're just carrying that high through the season. We know what we need to do. We know what the competition looks like. We have a lot of work, but lots of time to do it."

Liberty's long-range dream is to win its first national title in program history, following the path of the Lady Flames' ACHA DI women's team that has won three crowns in the past five seasons.

"Our goal this year is to work on speed to the net, because we have players that can score, we have people that can get us to those goals that we have of making it to nationals again and making it to the championship game," junior defenseman Alexis Early said. "What we need to focus on is pushing ourselves past old limits. There's nothing we can't reach as long as we put our mind to it. It's all about mindset, and this season's team, the mindset is, ‘We want to get to Dallas. We want to be in that championship game.'"