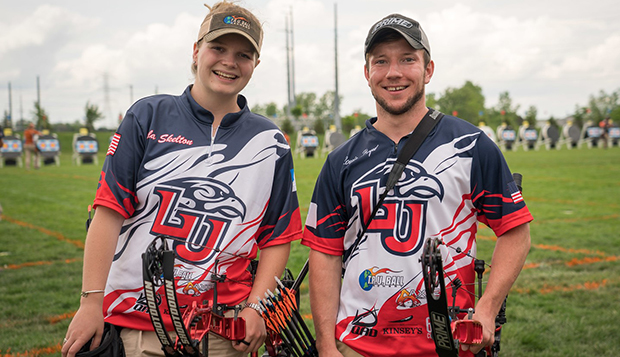 First-year Head Coach Ben Summers will travel with a quiver full of competitors from Liberty University's men's and women's archery teams for this weekend's USA Archery 3D Outdoor National Championships in Foley, Ala.

The 12 archers will represent the Flames and Lady Flames in all but one individual event — the women's Olympic recurve. This season's team has a three-to-one ratio of female to male archers.

"Archery has always been a male-dominated sport, but collegiately, it's really taken a turn," sophomore compound archer Hala Skelton said.

"It definitely has flipped, so that will help us in the women's categories," said graduate compound archer Louis Boyd, who was part of a 3D outdoor men's team title in bowhunting in 2017. "A good amount shoot 3D because they hunt. Then, we've got some more who really kill stuff indoors."

After arriving on Thursday night, the archers will test their sights and go through an equipment check on Friday morning before participating in a friendly team competition in the afternoon. That will serve as practice for a 20-target competition on Saturday morning and another 20 that afternoon from known distances of 30 or 45 yards.

"This will be new for me, being in collegiate competition," said Summers, a Level 3 National Training System (NTS) coach who is president of manufacturing and production at TRU Ball/AXCEL Archery in nearby Madison Heights. "We have some talent, so it will be interesting to see how we do. I just want them to enjoy themselves and do the best that they can do and hopefully that will be enough."

The range is located on more than 100 acres of protected wetlands in the Graham Creek Nature Preserve.

"It is fairly flat since it is right on the coast, almost on the Gulf of Mexico," Summers said. "About half the team has been there. Typically, it can be windy and rainy there. You never know what you're going to get."

Skelton has competed throughout the United States as well as in Canada and Puerto Rico, and traveled to Rome with the Junior Dream Team, an Olympic developmental program.

"I've actually known (Summers) since I was 12 and started shooting with his products, the sight and the release," she said. "It's so cool to have someone who is so invested in the industry to pour into our team."

Summers has been impressed with the dedication his archers have shown in the preseason, leading up to their first of three national competitions — 3D Outdoor in the fall, indoor in the spring, and field archery in the summer.

"We've been having three practices a week, but a number of them have been going out to shoot even on days when I'm not there," he said. "When you have people who care that much, it's really awesome. They have been doing some really great shooting in practice."

Among the top competitors to watch on the women's side are Skelton and bowhunters Rachel Beiler, a senior, and Emma Suggs, a sophomore. Boyd will lead the men's contingent in compound while sophomores Connor Rothermel and Isaac Underhill should excel in the men's Olympic recurve and barebow, respectively.

They will face stiff competition from several of the best collegiate archery teams in the country, including Columbia, JMU, and Texas A&M.