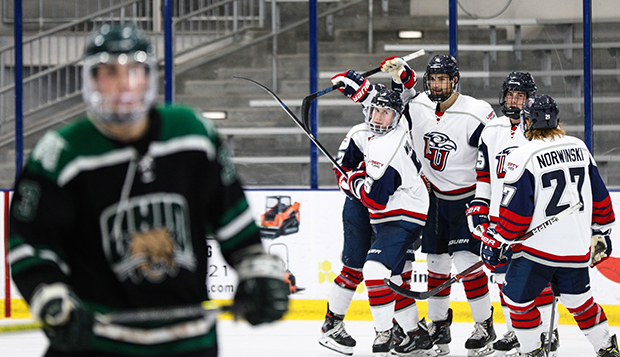 The Flames celebrate one of seven goals against Ohio in Saturday's rematch at the LaHaye Ice Center. (Photos by Andrew Snyder)

The Flames (4-0) have now outscored opponents by a 32-2 margin through their first four games. Sophomore goalie Dakota Cyhaniuk posted his first two shutouts of his career.

"We had a lot of different people produce offensively, which was great to see," Liberty Head Coach Ben Hughes said. "Our defense didn't get tested too much (by Ohio), but we will focus on that this week in practice because Penn State will definitely make us work in our defensive zone this weekend."

Junior forward Blake Flanders started the scoring in Friday night's opener against the Bobcats with a putback from deep in the right circle for an early 1-0 lead just three minutes after the opening faceoff.

Sophomore forward Luke McFarlane doubled the lead to 2-0 with a top-shelf shot from near the same spot with 11:17 left in the first period. After nearly 20 minutes of scoreless action, the Flames stretched their advantage to 3-0 when junior forward Michael Niederer sent a beautiful backhanded cross-crease pass between the skates of sophomore forward Timothy Doe to sophomore defenseman JD George for a one-timed shot from deep in the left circle at the 12:08 mark of the second period.

Just over a minute later, sophomore forward Peyton Nash finished the putback of a shot by freshman Jaime Ross through the five hole from out in front, spreading the Flames' edge to 4-0.

Niederer assisted the Flames' fifth goal with a pass across the slot to junior defenseman Alex Norwinski, who lifted a wrist shot from deep in the right circle into the top-right corner of the cage with 7:46 left in the period. Then, Norwinski returned the favor with a shot from the high slot that Niederer redirected through the five hole for a 6-0 advantage at the 3:59 mark.

Sixteen seconds later, Liberty stretched its lead to 7-0 when sophomore forward Darren Carter skated behind the cage and sent a backhand assist past the near post back to Nash for a shot in the left crease.

Doe put the Flames up 8-0 by stealing an outlet pass near the Bobcats' blue line and converting a breakaway opportunity with a fantastic finish, tucking the puck around the goalie's pad inside the right post with 16:34 remaining in regulation.

Less than 90 seconds later, Ross capitalized on a fast break by skating onto a pass flipped up the left boards by Nash and cutting into the slot before beating Ohio goalie Ryan Dunning with a shot to the top right corner to make it 9-0. Finally, with 4:39 to go, Carter capped the scoring by slamming home assists from graduate defenseman Drew Crilly and sophomore forward Charlie Wilkie from in the right crease.

In Saturday's rematch, the Flames continued to pour gasoline on its high-octane offense with Nash and Doe starting the scoring before Niederer tipped in a shot by Flanders for a 3-0 lead by the end of the first period. Early in the second, freshman forward Alex Schneider made a steal in the defensive zone and finished top-shelf for a 4-0 advantage before Wilkie lifted the rebound of a shot from the high slot by George past Dunning and into the upper netting. Crilly scored on a wrist shot from the top of the right circle midway through the third period before Flanders capped the scoring with a power-play goal assisted by Niederer and Doe with just under four minutes remaining.

Liberty hosts another Southeast Region rival this weekend when perennial power Penn State visits the LaHaye Ice Center on Friday at 6:30 p.m. and Saturday at 1:30 p.m.

"They've been the measuring stick and benchmark for us and we're really excited to play them this weekend," Hughes said, noting that the Flames lost the past two MACH Tournament finals to the Nittany Lions, who clinched autobids to nationals with top-two regional rankings. "That's our goal — to be in one of the top two spots heading into nationals. It attainable for us. We just have to execute."

Flames sophomore forward Timothy Doe stretches to try to steal the puck from an Ohio player.