Freshmen lead way for Liberty in 4-0 blanking of Bearcats 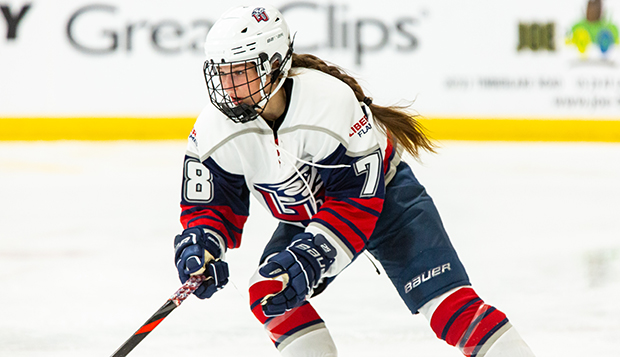 First-year forwards Yannick Truter, a freshman, and Val Manchak, a graduate student, who scored their first goals as Lady Flames in Friday night's 4-0 regular-season opening victory at Lindenwood Belleville, both scored off assists from the other to spark Liberty University's ACHA Division I women's hockey team to a 4-0 triumph at McKendree (Ill.) University on Sunday afternoon.

Two other Lady Flames freshmen also had breakout performances, as Kayla Savoie-Penton recorded her first ACHA win and shutout in goal, and forward Brooke Pellizzari scored her first goal off an assist from senior forward Deena Birney, giving Liberty a 2-0 lead with 20 seconds left in the first period.

"It was very encouraging to see offensive production from three different players new to our team this year," Lady Flames Head Coach Chris Lowes said. "We are already a deep team and they have added to that depth. We're still coming together as a team so it was a good road trip with a lot of positives."

Like Liberty (2-1, 2-1 WMCH) and Lindenwood Belleville, McKendree (0-2) is a member of the Women's Midwest College Hockey conference.

"McKendree's a young team but a talented team," Lowes said. "They've got a bright future and I'm glad that we get to play them again (Jan. 31-Feb. 1 at home). We controlled play and time in the offensive zone by moving the puck better and showing a little more urgency and speed."

Manchak struck first, capitalizing on a pass from Truter with 7:00 left in the opening period. After Birney's goal, Truter pushed the Lady Flames' lead to 3-0 with 1:46 to play in the second, finishing feeds from junior forward Danica Polson and Manchak. Finally, with 5:30 to go in the third and Liberty on a power play, Polson capped the scoring off assists from senior forward Alex Smibert and senior defenseman Emily John.

"After going zero for five (in Saturday's 4-1 loss to the Lynx), we were encouraged to get that late power-play goal," Lowes said, noting that the Lady Flames outshot the Bearcats, 43-8. "It was a good response and pretty solid win, all in all. We showed a lot more resolve and bounced back from yesterday. We got the message that that wasn't good enough and wanted to be better."

The Lady Flames have next weekend off before hosting Massachusetts on Oct. 12-13 in their ACHA openers at the LaHaye Ice Center. They will then travel to UMass and Rhode Island to play four games in four days from Oct. 17-20. 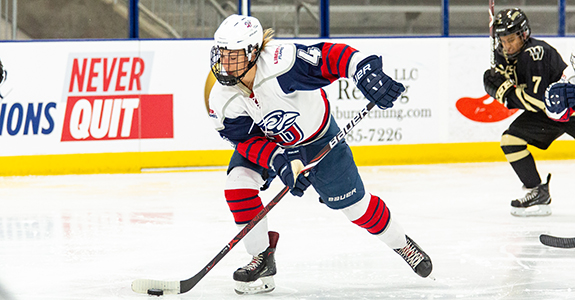