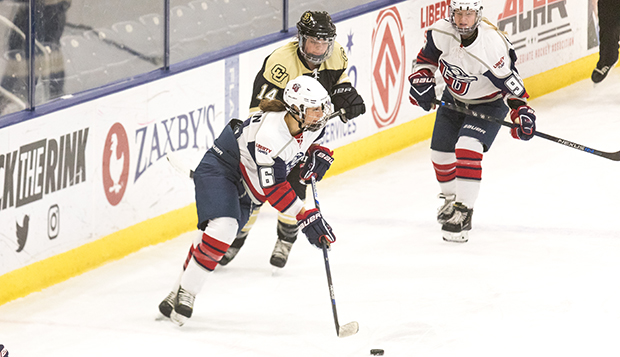 The Lynx (2-1) turned the tables on the Lady Flames (1-1) following Friday's shutout loss, opening a 3-0 lead after the second period and holding on for a 4-1 upset victory. Lindenwood Belleville outshot Liberty by a 29-25 margin.

"Their execution was better," Lady Flames Head Coach Chris Lowes said. "Our energy was a little low. They capitalized early on a couple and we didn't respond very well."

Liberty trailed 3-0 after Spicer scored off assists from Fisher and Delry in the second period, but the Lady Flames cut the deficit to 3-1 just 13 seconds into the third. Freshman forward Yannick Truter scored her second goal in as many games off an assist from junior forward Danica Polson.

The Lady Flames had a goal disallowed right after they scored their first one, causing their comeback bid to stall, with the official ruling that the puck went in the net off a Liberty player's glove.

Lynx forward Dakota McAlpine capped the scoring off an assist from Jamie Riselay with 13:30 remaining in regulation, knocking Lady Flames starting goalie Nadia Rupoli out of the contest after the collision as she put the puck in the net off a rebound.

Freshman Kayla Savoie-Penton relieved Rupoli and made five saves without allowing another goal in her Liberty debut. She will start in Sunday's 2 p.m. (EST) contest at McKendree University.

"We are still learning who we are as a team," Lowes said. "It is always a process to learn how to win and to do it consistently against top teams. The good thing is we get a chance to rebound (Sunday) against a very good McKendree team and I expect we will see a better response."