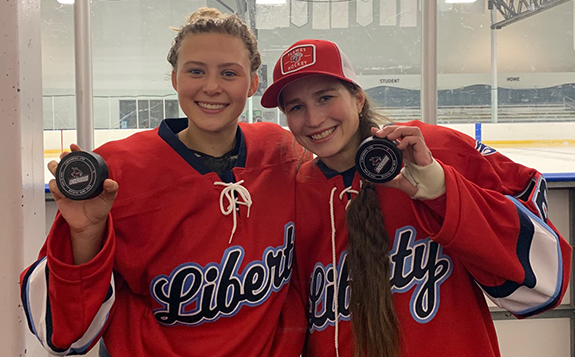 Yannick Truter (left) and Val Manchak netted their first goals as Lady Flames to start the scoring in Friday's season-opener.

The Lady Flames (1-0) and Lynx (1-1) both compete in the new Women's Midwest Collegiate Hockey (WMCH) conference this season, and this was the first WMCH game for both teams.

Liberty outshot Lindenwood Belleville by a 35-24 margin and senior goalie Nadia Rupoli recorded 24 saves for the shutout after finishing last season 18-0-2 with only two shutouts.

Nadia made two great saves on breakaways and did a good job overall," Lady Flames Head Coach Chris Lowes said. "We needed that early on and it was encouraging."

Val Manchak, a Ukrainian-born graduate forward, scored Liberty's first goal off assists from sophomore forward Lexi Paulmert and freshman linemate Brooke Pellizzari with 3:56 left in the first period. Yannick Truter, the Lady Flames' first recruit of the 2019-20 class, made it 2-0 by finishing assists from junior forward Danica Polson and Manchak with 5:43 to go in the second.

Just over two minutes later, junior forward Shelby Bradford scored off an assist from sophomore forward Grace Machholz at the 3:00 mark, and senior defenseman Dana McLeod, assisted by Truter, capped the scoring on a shot from the point just as the Lady Flames' power play was expiring, with 10:43 remaining in regulation.

"For our first regular-season game of the year, it was bound to be a little sloppy, but as a coaching staff, we were pretty happy overall," Lowes said. "Our first two goals were scored by first-year players, so that gave us a little spark there and it was good to see the power play be a little bit productive. As the game went on, we were starting to see some chemistry on our lines."

Whereas Lowes' coaching staff has remained intact for the third year in a row, Lindenwood-Belleville has a new head coach this season

"They've been on the rise and I anticipate them being a nationals team and a top team again," Lowes said. "There's a lot of talent there and they'll continue to get better as the season goes on. They were motivated and fired up, and it was a tough, physical game and we expect more of the same in tonight's rematch."

"McKendree has been off this weekend and will be a fresh team waiting for us," Lowes said. "We're in early-season shape so playing three games and another four on our next road trip (Oct. 17-20 at UMass and Rhode Island) will be good for our conditioning."