Flames light up Crimson Hawks to delight of late-night crowd 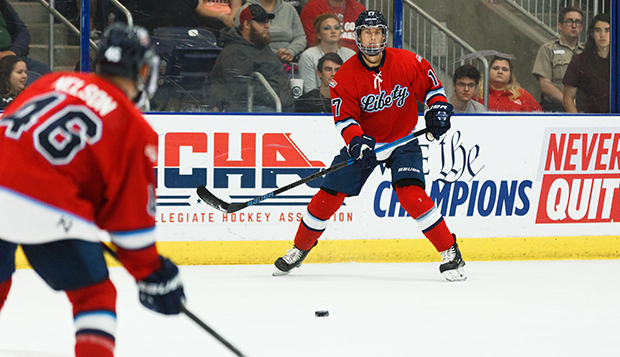 Liberty University's ACHA Division I men's hockey team celebrated the first of two Midnight Mayhem matchups this semester by rocking the rink at the LaHaye Ice Center early Saturday morning while defeating Indiana University of Pennsylvania (IUP) for the 10th time in as many tries, 6-0, to complete the series sweep.

The Flames thrived on the after-hours adrenaline, outshooting the Crimson Hawks (0-4) by nearly a nine-to-one margin and improving to 3-0 on the season while keeping the capacity College For A Weekend (CFAW) crowd entertained throughout the high-energy contest.

"The crowd was fantastic tonight, from the opening faceoff on, one of the best I've ever seen to be perfectly honest," Liberty Head Coach Kirk Handy said. "Overall, it's a huge positive, a great college hockey experience for those guys to play in front of that many fans."

The Flames capitalized on the first of three power-play goals when senior defenseman Garrett Nelson received a pass from freshman forward Arturas Laukaitis in the high slot and launched a wrist shot through traffic into the top left corner of the cage for a 1-0 lead with 7:51 remaining in the first period.

"It was a good setup by Arti and Josh (Fricks) and then (Matt) Bartel had a nice screen in front," Nelson said. "We were struggling (on the power play) the first two games. I think we were one for seven going into tonight, so it was a big turnaround and we needed it. We did a pretty good job staying out of the box. Guys were pretty smart and just let them take the penalties so we could capitalize on offense."

Liberty added two more scores in the final 43 seconds, the first a power-play finish by senior forward and alternate captain Brock Thompson, who trapped a pass from Nelson in the right circle and lifted a sharp-angled shot into the upper netting.

After Liberty head captain Devin Pierce won a faceoff in the Crimson Hawks' left circle, fellow junior forward Jordan Bochinski sent a pass to senior defenseman Basil Reynolds in the right circle, where he threaded a shot through an IUP defenseman and goalie Jared Stahel to extend the lead to 4-0 with 9:18 left in the second period.

Liberty converted its third power-play score at the 6:32 mark when Laukaitis put away sophomore linemate Matt Bartel's assist from behind the cage with a sweeping backhand in the left crease under the pads of a sprawling Stahel for a 5-0 advantage.

Just 1:19 into the third period, freshman defenseman Colin Baird capped the scoring by receiving a beautiful backhanded assist across the slot from Laukaitis and burying his approach shot into the back of the net from deep in the right circle.

"Colin Baird has been a real pleasant surprise for us," Handy said. "He's someone who fits our culture and has embraced his opportunity here at Liberty. He's been an outstanding player and done great things in his first three games here and he's only going to get better."

The final 18:41 of action remained scoreless, though the Flames continued to generate quality chances with and without a man advantage.

"Their goalie stood on his head tonight," Handy said. "There could have easily been four or five more goals in our favor."

Sophomore goalie Tyler Myers posted a shutout in his first start between the pipes for the Flames.

"A shutout is a team goal and I'm proud of that group out there," Handy said. "(Assistant Coach) Jonathan Chung's doing a great job working with the penalty kill."

"We have a very strong penalty kill so even when they got a power play, it doesn't really affect us when we do our jobs," freshman defenseman Dmytro Kobylyanskyi added. "That was our goal, to not let any goals in and all the guys sacrificed themselves to try to block shots."

Liberty will travel to Alabama next week for its first road series against the Frozen Tide, set for Friday at 7 p.m. and Saturday at 4:30 p.m.

"We're going to have to continue to improve," Handy said. "I think we've gotten better every game." 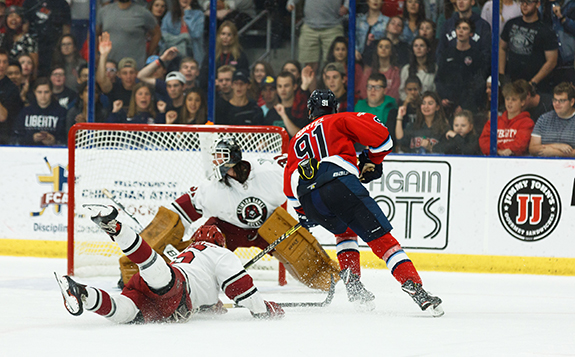