Rifle shooting team to debut Saturday in scrimmage with UVA 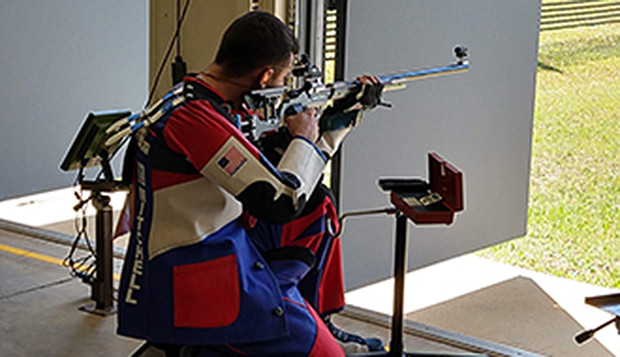 Liberty University's second-year rifle team will host the University of Virginia in a scrimmage on Saturday at 4 p.m. at the Liberty Mountain Gun Range.

"We have had about a month of training and this will give us both an opportunity to go shoulder-to-shoulder with another team," rifle Assistant Coach Marlene Gray said. "We've liked what we've seen so far."

"The rifle team is only in its second year and it is still building, but it is going to be very strong," Liberty Head Coach Dave Hartman said. "It has come a very long way in just one year, especially with Mitchell winning a national championship. A couple others have shown great promise and I look forward to seeing them at their first competition."

In October, Liberty will begin monthly postal competitions against teams from across the country in the Western Intercollegiate Rifle Conference. In the spring semester, the Flames and Lady Flames will travel to the Feb. 8 NRA Rifle Sectionals at UVA, which will serve as a qualifying match for the March 20-22 NRA Intercollegiate Club Rifle Nationals Championships at Fort Benning, Ga. They will also fly to Chicago for the Western Conference Championships, set for Feb. 21-22 at Purdue University.

Hartman said Liberty's Action Sports team, coached by Rick Warner, Michael Lowe, and himself, has a tremendous amount of potential competing in the Scholastic Action Shooting Program (SASP), an offshoot of the National Shooting Sports Foundation.

"It's a brand new sport in relation to the rifle and the shotgun team, but there are a lot of new things to come with that, and that is exciting," he said.