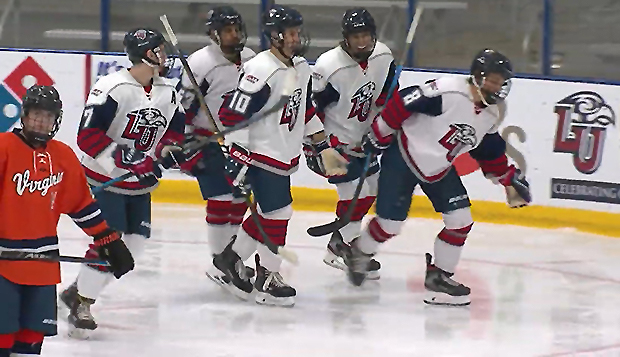 The Flames started their season on Saturday with a 6-1 triumph over the same Duquesne University team that Liberty's DI squad dominated by an 11-1 final in its Friday night opener.

In Sunday's ACHA DII debut against Virginia, the Flames outshot the Cavaliers by a 70-16 margin in a 9-1 rout.

Junior forward Michael Niederer opened the scoring less than two minutes after the opening faceoff on a rebound of a shot by graduate defenseman Drew Crilly. At the 13:19 mark, sophomore forward Charlie Wilkie netted a backhanded putback of a shot off the post.

Midway through the second period, junior forward Blake Flanders was in the right place at the right time to punch in a loose puck off a shot by Niederer that UVA goalie Spencer Pierce blocked but could not cover up. Flanders' goal extended the Flames' lead to 4-0 at the 10:02 mark.

Exactly a minute and a half later, Carter chased down a long outlet pass by sophomore forward Timothy Doe, beating a UVA defenseman to the puck and then cutting in front of Pierce, who came out of the cage, before tapping it into an open net for a 5-0 advantage.

With 4:17 left in the second period, Flanders batted the puck out of the air at the top of the right circle, assisting sophomore forward Maxx Mitchell's one-timed, top-shelf shot from the slot.

Seconds later, after the Flames won the ensuing faceoff, junior defenseman Alex Norwinski sniped Liberty's seventh score through traffic from the top of the left circle.

The Cavaliers ended Liberty's sophomore goalie Dakota Cyhaniuk's shutout bid with 16:07 left in the third when defenseman Thomas Elia assisted forward Will Thrun with a cross-crease pass, trimming the deficit to 7-1. But Flames graduate forward Jerrell Campbell netted the game's final two goals by roofing a sharp-angled putback of Carter's shot in the left crease with 9:58 remaining and later tipping senior defenseman Ryley Richardson's shot from the point past Pierce from in the right circle.

"We were very pleased to see the offensive success created this weekend," Liberty Head Coach Ben Hughes said. "Guys are starting to settle in ... and gel together. We will continue to prepare and get better each day."

The Flames will return to action on Friday at 7 p.m. and Saturday at 1:30 p.m. against Southeast Region rival Ohio, their third and fourth of 11 home games to start the season.