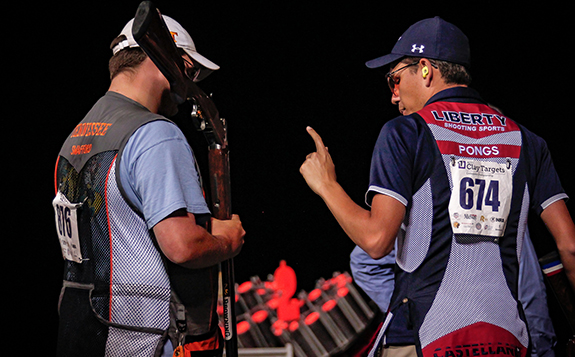 Liberty University's shotgun team, one of three squads within the Club Sports shooting sports program, will open its season when it competes Saturday in the University of Maryland's Terrapin Classic at the Prince George's Trap and Skeet Range in Glen Dale, Md.

"We had a number of new people try out this year, and the scores went up," Liberty Head Coach Dave Hartman said. "I have a great team that is very balanced. Any one of them out of the 16 on the roster could make the top 10. It's wide open at this point. Anything can happen. They all have the potential to be great."

They will challenge returning seniors Landon Dalton, Tommy Hartman, Liz Wesner, and Casey Williams, as well as juniors Jonathan Britton, James Bushnell, Jacob Davis, and Justin Johnson among others. Davis also landed on the podium at the skeet world championships.

After Saturday's event, the team will compete at the Oct. 18-20 SCTP College National Championships in Maringo, Ohio, before hosting the Fall Sporting Clays Invitational on Oct. 26 at the Liberty Mountain Gun Club. It will then travel back to Maryland for the ACUI East Coast Regional Championships, a nationals qualifier won by Liberty last season, from Nov. 8-10, and then to Fort Benning, Ga., from Feb. 22-23 for an International Skeet and Bunker Trap qualifier for the March 21-22 International Shootout in Kerrville, Texas.

That all will set the stage for the ACUI National Championships from March 24-29 in San Antonio, where the Flames and Lady Flames will compete in Division 3 this season after strong showings at Division 4 in 2018 and Division 2 this past spring.