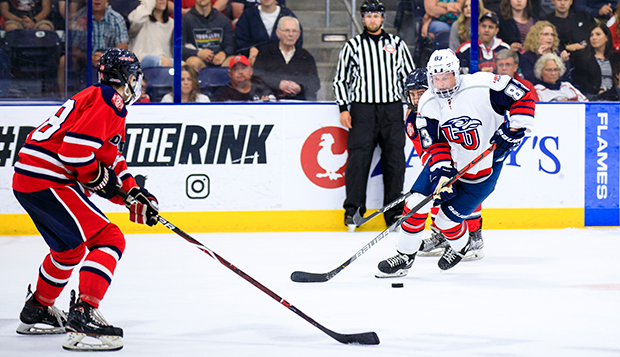 "It was a great start and a great crowd," Fricks said. "It was really fun to skate out there at the start and see it full. That gave the boys a lot of energy and it was a fun game. You could hear the crowd every time you made a move or got a hit. It was awesome."

A former teammate of Flames senior forward Brock Thompson in Florida, who led the Utah Outliers in scoring last season, Bartel sparked the offense after gloving the puck in his defensive end with Liberty on a five-minute penalty kill. Seeing open ice, he skated through the neutral zone and cut into the left circle, where he maneuvered around Dukes forward PJ. Breslow and threaded a shot past goalie Wade Conlan for a 1-0 lead.

"He's a guy who works hard every day and plays solid on both ends of the rink," Liberty Head Coach Kirk Handy said of Bartel. "We had freshmen contributing all over the ice tonight. On the back end, Colin Baird had a great game and (goalie) Cédric (Le Sieur) played well and made saves when he had to early on in their five-minute power play."

Liberty added two more goals at even strength in the final 5:09 of the first period, the first by junior forward Jordan Bochinski, who received a beautiful crossing pass from senior forward Zechariah Roberts and finished into a near-open net from out in front. Less than two minutes later, sophomore forward Josh Fricks received an assist across the slot from sophomore forward Arturas Laukaitis and pocketed the puck from deep in the right crease for a commanding 3-0 advantage.

Fricks picked up where he left off to start the second-period scoring, lifting a loose puck from near the left post into the upper netting after consecutive crossing feeds from senior forward Quinn Ryan and Laukaitis, stretching Liberty's lead to 4-0 at the 15:14 mark.

Then, with 8:33 left in the second stanza, after senior defenseman Garrett Nelson cleared the puck to Thompson on the right wing, sophomore forward Devin Melice one-timed his first goal at the DI level from the high slot off a crossing pass from Thompson.

"We have four lines that can score goals and it doesn't matter who's out there, it's always dangerous," Fricks said. "Right now, the lines are pretty good and everyone seems to be getting along so it's exciting to see. We played really well."

The Dukes ended Le Sieur's shutout bid when Hayden Feck finished a short crossing pass from Cam Sunseri on a fast-break high over Le Sieur's left shoulder, trimming the deficit to 5-1 with 6:29 left in the period.

But junior forward and head captain Devin Pierce answered less than three minutes later, receiving an outlet pass from Nelson and skating the puck down the right wing before cutting across and deftly tucking a backhand under the pads of a sprawling Conlan to make it 6-1 with 3:46 left in the second. Just 25 seconds later, Pierce sent a crisp assist across the slot to senior defenseman Jacob Fricks for a one-timed finish in the left circle, stretching the gap to 7-1.

Following a dazzling skate toward net by Josh Fricks, showcasing fantastic stick skills and deking around defensemen, Nelson cashed in top-shelf, extending the Flames edge to 8-1 at the 1:58 mark.

"Garrett Nelson had a real solid game," Handy said. "He was dominant for us."

Ryan weaved his way through traffic with phenomenal speed and dexterity down the right wing before depositing the puck through the five hole as he leaped across the goal box with 10:30 left in the third.

Then, with 8:00 to go, Bochinski pounced on a puck sprung loose by Baird and crashed across the cage, somehow squeezing the Flames' 10th goal between the pads of Conlan as he avoided a collision.

Finally, with 5:41 remaining, Josh Fricks completed his hat trick by sticking a putback of Ryan's blocked shot inside the right post to cap the scoring.

The Flames are off until Thursday, when they will open a series against another CMHA opponent, Indiana University of Pennsylvania (IUP), at 7 p.m. back in the LaHaye Ice Center, followed by the semester's first Midnight Mayhem matchup against IUP on Friday at 11:59 p.m.

Freshman goalie Cedric Le Sieur does the splits to make a save between Arturas Laukaitis (17), Colin Baird (5), and Garrett Nelson (5), before a full house Friday night at the LaHaye Ice Center.