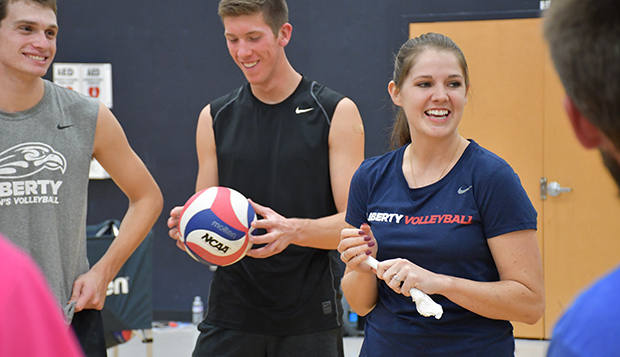 Madison Anema, a two-time All-American outside hitter on Concordia (Calif.) University's women's volleyball team, was hired in August to serve as Assistant Coach to Kaleb VanDePerre, who is in his first season as Head Coach of the Flames' men's indoor volleyball team.

"She is going to be and has already been an incredible addition," VanDePerre said. "She has a really strong playing and coaching background and trained through Gold Medal Squared," world-class volleyball education used by USA Volleyball.

Anema played for current Lady Flames women's volleyball Head Coach Trevor Johnson when he coached at Concordia. She led the Eagles to a 2012 NAIA national championship in her junior year and a runner-up national finish in 2011. She is married to current Liberty women's Assistant Coach Brett Anema, a former member of Concordia's NAIA national champion men's team, which was also coached by Johnson.

Before starting as professional advisor in Liberty's College of Applied Studies and Academic Success (CASAS) last fall and beginning pursuit of her M.S. in Human Services Counseling — Life Coaching through the School of Behavioral Sciences, Anema coached club volleyball in Texas and California and at a high school in California. Last year, she served as an assistant coach for Randolph College's NCAA Division III program in Lynchburg, Va.

"This is my first year coaching men, though I was around the men's team a lot (at Concordia) when I was playing," she said. "It's been good. I'm excited to work with the guys. It's a whole other energy level, that I like. (Teaching) the technical aspect of (the sport) is kind of my strength. It's a strength that the girls' game has that I think the guys let lax a little bit just because of their athleticism."

VanDePerre said Anema has introduced new techniques and ideas in practices to help the Flames develop team strategies and formations in preparation for next Saturday's season-opening Fall Tournament at the LaHaye Multipurpose Center.

"She's teaching a lot of the same things we did at Saint Francis, based on USA Volleyball techniques, so I'm very happy with that," added sophomore outside hitter Cross Edwards, who transferred from that NCAA Division I University based in Pennsylvania.

In addition to coaching the Flames' Division II team, when that is finalized for the spring semester, Anema will help provide stats and film on both teams' games for analysis using Hudl, the same software Liberty's men's and women's hockey teams use to break down film.

She is looking forward to applying what she is learning through her degree field of study.

"Overall, I am just trying to develop the whole team as individual volleyball players," she said. "I try to grow people and volleyball's just a way to grow people. They've been really respectful and they appreciate the knowledge I'm bringing in. It's a really good situation."