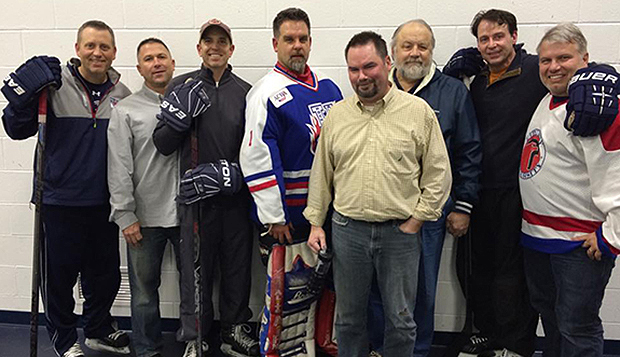 Several alumni who played for former Head Coach Gary Habermas (third from right) returned in the Fall of 2014, when he was inducted into the inaugural Club Sports Hall of Fame class.

Liberty University's men's hockey program is celebrating its 35th anniversary this year and hopes to make Homecoming Weekend the best representation ever in terms of participation in two alumni games on Saturday, Oct. 19.

A "Legends Game" for players ages 40-and-over is scheduled for 10:15 a.m., followed by a "Young Guns" contest at 11:30 a.m. and an alumni luncheon at 1:30 p.m. A complete schedule of hockey alumni weekend events is available online.

"We are trying our best to have as many players come back as possible," said Flames ACHA Division II men's hockey Head Coach Ben Hughes, a 2017 alumnus and former defenseman on the DI squad who also serves as Liberty Hockey recruitment coordinator. "We want to have guys from the original team as well as those who just graduated a couple years ago. The more guys who can meet each other and bridge that gap of three and a half decades of playing hockey at Liberty will be amazing."

A registration link is available for returning players and their families planning to attend the weekend's events, highlighted by playing and spectating opportunities at the LaHaye Ice Center. Alumni may also register for a full schedule of activities on tap for Homecoming on the Mountain.

On Friday, Oct. 18, hockey alumni are welcome to an open-ice session from 3:15-5:15 p.m. with a check-in scheduled for 5:45 p.m. The DI men's hockey showdown with Syracuse — in a rematch of last season's ESCHL Tournament championship game — will start at 7 p.m. and all hockey alumni present will be recognized on the ice at 6:55 p.m.

"That is a huge anniversary and it will be a good time," Flames DI men's hockey Head Coach Kirk Handy said. "We definitely want to keep the old and the young together and we always want our (current) guys to be thankful for the legacy that's gone before us, both on and off the ice."

After Friday's DI men's opener against the Orange, the Flames' DII men will host Drexel at 10 p.m. before Saturday will feature all three Liberty men's teams in action. Following the alumni doubleheader, the Flames' DI lineup will entertain Syracuse in a 2 p.m. series finale before the DII team plays its second game against the Dragons at 6:30 p.m., and Liberty's DIII squad will host Northern Virginia Community College at 9:45 p.m.