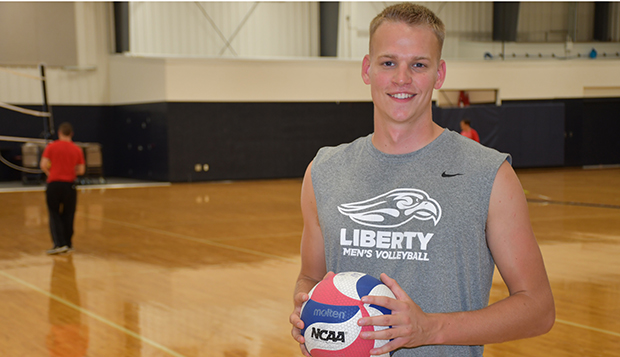 Cross Edwards had 506 kills, 444 digs, and 62 service aces in his career at Pennridge High School, north of Philadelphia.

The Flames, who are coming off their first Final Four showing in program history at last spring's NCVF Division I National Championships in Denver, are building on a solid foundation for future success.

"We are really young this year, but have some really athletic guys with a lot of volleyball experience," VanDePerre said, noting that the Flames feature no seniors and only one junior. "We have a bunch of outside and middle hitters, and a lot of guys competing with each other to separate themselves for starting spots."

Among the newcomers are outside hitters Cross Edwards, a sophomore transfer from NCAA Division I Saint Francis (Pa.) University, Caleb Kaopuiki from Oahu, Hawaii, and Matthew Marcinko, an engineering major from Piscataway, N.J.

They will complement returning sophomores James Morton, Logan Spieker, and Cody Reinsma and junior Sean Taggart, who had breakout seasons as outside hitters for the Flames' DI and DII teams last season. Reinsma is shifting to opposite hitter, where sophomore Joshua Knapp thrived last year. Knapp, who is 6-feet, 8-inches tall, may do more setting than hitting this season, as he did in his high school career in Maryland.

Edwards transferred to his parents' alma mater this fall to enroll in Liberty's School of Aeronautics, joining his older sister, Alexis, who is a senior member of the Flames' cheerleading team. He played with Spieker for Club Lehigh (Pa.) and is an East Campus roommate with Knapp and Reinsma.

"I am super excited to be at Liberty and I am having a lot of fun," said Edwards, who considers his strengths passing and defense. "I'm very competitive and I do like to win. I love my team. They're great guys and they've welcomed me with open arms. We have six outside hitters, but we're working as one team, one family. This is only the second week, but everything's looking good right now and it only gets better from here."

Kaopuiki was recruited by former Flames Head Coach Bryan Rigg before VanDePerre took the reins of the program this summer. He said the transition has been seamless.

"Back home, the coaches I used to play under were USA Volleyball coaches, so having Coach VanDePerre and Coach Madi (Anema) here was something that was easy to adapt to, making it a pretty comfortable move from there to here," he said, noting that both are USA Volleyball-certified coaches.

Other new recruits include John Sauder, a freshman middle hitter from Pennsylvania, and Brannon Anderson, a freshman defensive specialist/libero from North Carolina, as well as Tommy Otte, a sophomore from the Flames' beach volleyball team, and two walk-ons — sophomore Ian Davis and freshman Chase Keith.

"We definitely have some work to do with a lot of the freshmen in terms of catching them up to speed as they are adjusting to the faster, more physical game play," VanDePerre said.

After developing team chemistry through intense early-morning workouts last week and afternoon practices this week, the Flames will spend time building camaraderie this weekend on a team retreat at the Hydaway Outdoor Recreation Center.

"It's been awesome," VanDePerre said of the team culture he is fostering within the Flames. "We had some good team-bonding and team-building workouts together and practices have been really competitive. The guys are getting to know each other and we want to keep building off of that."

Kaopuiki, for one, did not enjoy the preseason workouts, which started before midnight, Hawaii-time.

"Last week's team-bonding experience was an interesting one — 5:30 a.m. wakeup calls followed by a lot of running on the football field and straight conditioning," he said. "It was ridiculously tough, a lot more work than I've been through in a very long time."

The Flames are gearing up to host club teams from George Mason, JMU, and Virginia Tech, among others, in a preseason fall tournament on Sept. 28 at the LaHaye Multipurpose Center. They will then enter two teams in a 16-team tourney against mostly East Coast Volleyball Association (ECVA) teams hosted by the Hokies in Blacksburg, Va., on Oct. 26 before going to Fairfax, Va., for a tournament at GMU on Nov. 9, when they could face the Patriots and a couple other NCAA Division I opponents as they did last fall.

"We're going to put guys in a lot of situations, to get a lot of different reps at different positions, and see who shines brightest in those tournaments," VanDePerre said.