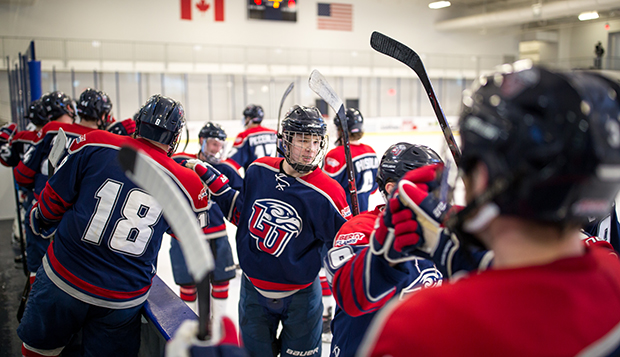 "George Mason is a really good team," Smith said. "They've got a lot of highly skilled players and a really good coach who has been around for a while. They're a team that actually looking to progress up the ranks in the ACHA, so it will be a really good test for us … early in the season."

Smith prepared his players for this weekend's start to the 2019-20 campaign with early-morning workouts at preseason camp in August.

"It's a little tough on the guys, but it forces them to bond together really quick and so far, it's been awesome," Smith said. "Every year, it's really important for the team and they guys like it. They all buy in, right off the hop, which is great."

"We're excited for the group that we have coming back and who's coming in," Wilson said. "We have a lot of speed and smaller guys who can play a quick game, so it'll be fun. We want to be smart in our own zone first and the things in the offensive zone will work themselves out. It's a defense-first mentality."

"We've got a couple good freshmen coming in and giving us some depth on the front end," sophomore right wing Scott Chisholm added. "We're looking forward to hopefully making it to regionals and doing well there. Nationals is the goal."

Liberty narrowly missed qualifying for the ACHA DIII National Championships last season after being edged by Coastal Carolina 4-3 in the final of the East Coast Collegiate Hockey League (ECCHL) tournament, and then by third-seeded Tampa 3-2 in overtime of the South Region tournament final in Huntsville, Ala.