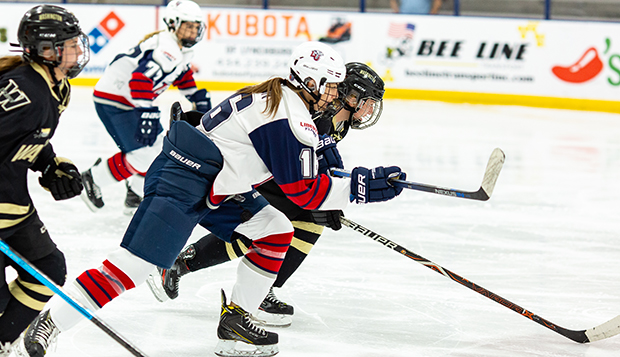 Liberty University's ACHA Division I women's hockey team showcased the speed and skill it used to win back-to-back national championships when it defeated the Washington Pride U19 travel team, 6-1, in Saturday night's opener at the LaHaye Ice Center.

The Lady Flames got a bit of a wakeup call in Sunday morning's rematch, when they dominated the Pride in shots on goal, 68-30, but wound up on the losing end of a 3-2 shootout.

"We had a couple defensive breakdowns, but we might have played better on Sunday," Lowes said. "Defensively, we were exposed on a few things and we showed a need to continue to work on our offensive execution. We got a lot of scoring opportunities and there is no reason we were only able to finish twice. Their goalie played well and we missed a few chances and they took advantage of theirs."

In Saturday night's opener, the Lady Flames sandwiched two goals from its forward line of senior Aly Morris and sophomores Grace Machholz and Alexis Paulmert in the first period and two scores from the line of seniors Rachel Gibson and Alex Smibert and freshman Brooklyn Pellizzari in the third period around two second-period power-play goals by Smibert and junior forward Danica Polson. Washington scored its only goal in the second period.

Senior goalie Nadia Rupoli was a standout for Liberty in the opener, making 34 saves as the Lady Flames outshot the Pride, 41-35.

"Rupoli stopped a couple breakaways, including a 2-on-0," Lowes said. "It could easily have been a 6-3 or 6-4 game, but we were fortunate to keep them out of our net. Special teams were big for us, and the two second-period power-play goals allowed us to gain some separation."

Liberty scored first in Sunday's rematch, with graduate forward Valariia Manchak finishing assists from Polson and senior forward Vanessa DeMerchant for a 1-0 advantage in the first period, but the Pride tallied twice off rebounds of outside shots to seize a 2-1 lead by the end of the second.

Gibson netted the equalizer unassisted with six minutes remaining in regulation before the two teams held each other scoreless for five minutes of three-on-three action in overtime. Senior defenseman Dana McLeod, junior forward Shelby Bradford, and Smibert missed their three shootout chances with Washington capitalizing on its second shot for the winning margin.

"We had to battle from behind, which is why we play exhibition games, for the same reason Washington did — to prepare for the regular season — and I'm glad we did," Lowes said. "We got really good battles out of the Pride and when we play Lindenwood-Belleville in a few weeks, we will look back and be glad we were able to fine-tune some things. We're going through the process."

The Lady Flames open their ACHA regular-season schedule with two games against the Lynx Sept. 27-28 in Wentzville, Mo., rematches of their 2019 national championship game triumph in Frisco, Texas. 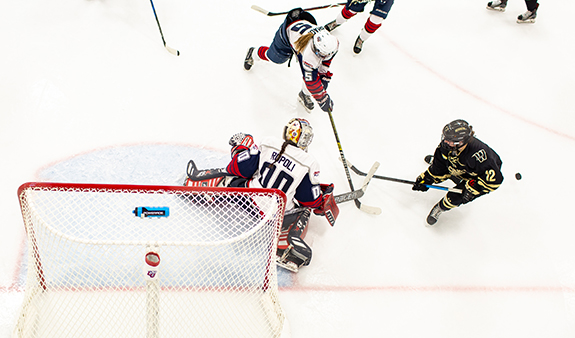