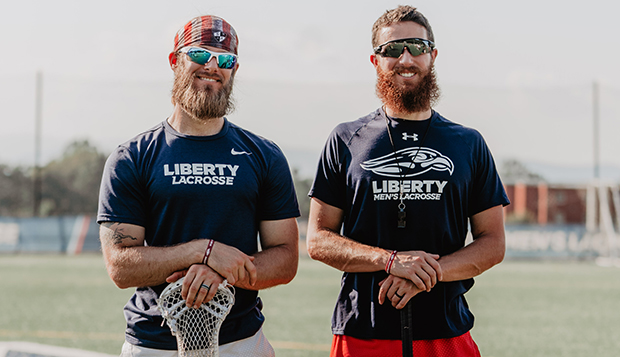 Justin Kilian (left) and Jessi Glauser are known for their beards as well as for strengthening bonds between Liberty teammates. (Photo by Sam Pyo)

Besides being assistant professors of exercise science in the Allied Health Professions department and assistant coaches of strength and conditioning for Liberty University's men's lacrosse team, Jessi Glauser and Justin Kilian are also well known on campus for their bodacious beards.

"It's a prerequisite as a strength coach," Glauser joked, noting that Club Sports Coordinator of Strength & Conditioning Chris Kerr, one of Kilian's former students, also sports an abundant crop of facial hair.

Kilian made a promise to shave if the Flames won the MCLA DI National Championships in Salt Lake City last spring, before they were eliminated in the quarterfinals by SELC rival South Carolina, the eventual champion. He plans to offer the same incentive next spring, should Liberty clinch its third consecutive trip to Salt Lake City.

Prior to becoming strength coaches, Glauser and Kilian were roommates at Liberty from their sophomore through senior years, 2006-09, and have remained best friends ever since.

"We try to emulate what Christian brothers should be because while we're not blood brothers, we're as close as we're going to get without having the same DNA," Glauser said. "We try to live our lives as Christ would and as brothers in Christ, and we sincerely hope that that's going to benefit (the players). We want to build young Christian men."

They play key roles in accomplishing that goal — physically through weight room training sessions three days per week and twice-weekly on-field workouts, as well as spiritually by being mentors and building team camaraderie on road trips and in practices.

"There are very few programs in the MCLA that have a strength and conditioning program within the lacrosse team, let alone two coaches that are professional educators in the field," Glauser said.

"I love practicing what I teach," Kilian added. "We all have basically the same purpose of being here, as a ministry to students within the disciplines we teach in."

The tandem is continually raising the bar and increasing fitness levels for a program that has reached the next rung on its climb to the top of the MCLA Division I ranks every season since Head Coach Kyle McQuillan took the helm in 2010.

"Kyle did most of that work," Glauser said. "Just to be around it and to see what has developed has been amazing."

The Flames rose as high as third and finished fifth in the final MCLA Division I rankings last season.

"We want to be ranked top-10 and make a big splash at nationals every year," Kilian said.

Kilian works with the defensive players in the LaHaye Ice Center while Glauser leads workouts for the offense in the nearby Club Sports strength and conditioning facility.

"We want them to do the exercises at the best of their ability to prevent injury while improving their performance … by getting stronger and faster and gaining power," Glauser said.

In on-field practices, they lead drills specific to the positions they coach — Kilian with goalies and Glauser with faceoff specialists.

"We work heavily on reaction time," Glauser said. "For goalies and faceoff guys, if reaction time is not optimal, you're either losing the ball in the faceoff dot or the ball's in the back of the net."

They maintain close relationships with Club Sports athletic trainers in rehabilitating athletes' injuries, which have become rarer in recent seasons.

"When the strength and conditioning department was created, we saw a pretty sizeable reduction in injury because we were able to develop a stronger, more durable athlete," Glauser said. "In a high-octane, contact, collision sport like lacrosse, we have started seeing far fewer non-contact injuries."

McQuillan said the Flames are blessed to have access, through Glauser and Kilian, to the equipment and resources in the Human Performance Lab at the Center for Natural Sciences, and to draw on their knowledge and expertise.

"A lot of (MCLA) teams work with strength and conditioning coaches, but in terms of what we're able to offer, ours is definitely among the best," McQuillan said. "Jessi and Justin do a fantastic job with our guys."

He said as Liberty Lacrosse alumni, they have a genuine investment in the team.

"They're two guys who went to Liberty and were part of the program before it disbanded, so that puts a little more skin in the game," McQuillan said. "It brings an added sense of pride that we went to school here and are doing our best to elevate the program."

Kilian said it is part of their job to keep the players from getting complacent by continually challenging them to give their all for the betterment of the team and the glory of God.

"One of the big things that strength and conditioning can provide that a lot of people don't recognize is the mental strength — when you can get through a plateau and we have guys hitting numbers they've never hit before," he said. "What we really love to see is when our guys are giving it just as much at the end of the game as they are in the first quarter, then we can say we've done our job."