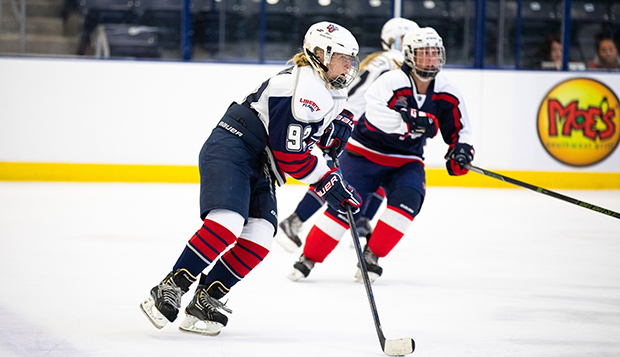 Ten returning forwards and defensemen give Liberty University ACHA DII women's hockey Head Coach Rena Leone a solid foundation to build on in 2019-20, her first full season at the helm after replacing Sara Madero on an interim basis last winter.

During the offseason, after leading the Lady Flames to their first College Hockey East (CHE) tournament championship, Leone and her new assistant coach, Cat (Burrell) Kelenic, recruited three incoming freshmen and welcomed sophomore goalie Madeleine Snook, who played on the Lady Flames' DI team last year. Snook will fill a void in net after Kelly Hutton, another former DI netminder, graduated in May.

"Maddie is ready to step into that position to be a leader on the team," Leone said.

Tryouts that started Saturday and concluded Wednesday afternoon elevated Leone's excitement level about the cast of players she has to work with this season — nine forwards, four defensemen, and one goalie.

"We had more numbers last year, but this year we'll have more heart," she said. "We do have a smaller bench, but the quality is definitely there, and the heart and the passion for the game is there. There's definitely better team chemistry this year, and we'll be able to get more experience traveling and playing together."

The Lady Flames will run three lines deep with the nine forwards and two defensive pairings.

"For leadership, we are definitely looking to sophomore defenseman Holly Turner and junior forward Brittany Hegele, who was our leading scorer her freshman year," Leone said.

They will be complemented by sophomore defenseman Paige Arnosti and freshman forward Morgan Whitehorn, who could start on Hegele's top line.

Liberty features just four regular-season home games on the schedule this season. The Lady Flames will open with an exhibition series against the North Carolina U19 Lady Hurricanes on Sept. 21-22 at the LaHaye Ice Center before starting CHE play Oct. 5-6 at Delaware, the team they defeated 5-1 in the CHE championship game. Their 25-game schedule includes 16 games against CHE opponents, six against U19 programs set up as recruiting opportunities, and a few against teams from the Delaware Valley Collegiate Hockey Conference, in which Liberty used to be a member.

A restructuring of the nine-team CHE places Liberty, the Naval Academy, and West Chester in the Southeast Division with Oswego, RIT, and Buffalo in the New York division, and Mercyhurst, Pittsburgh, and California University of Pennsylvania in the Pennsylvania division. The top four teams (three divisional regular-season champions and one wild card) will advance to the CHE Tournament.

Leone believes the new format gives the Lady Flames a better opportunity to return to nationals, after qualifying for the first time as a program in 2018.

After playing just four games in the fall semester last year, which hurt its regional standing and eventually kept it out of the ACHA DII National Championships despite finishing 16-4-1 overall, Liberty will have played eight games by the time the first ACHA DII rankings come out on Nov. 10.