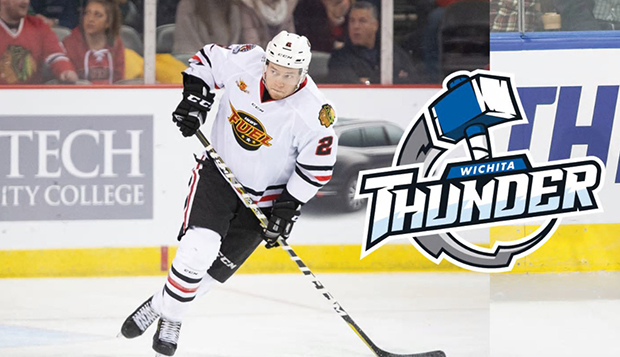 Former Flames defenseman Zane Schartz is entering his second full season in the ECHL and first with the Wichita Thunder.

"If I could pick any team in the league, that is the one I would want to play on because Wichita is where my parents were born and raised and where I was born," said Schartz, who moved to Dallas when he was 2 but returned to Kansas for most holidays; his parents are currently living in Wichita. "It has always been home to me, where all my grandparents, aunts, and uncles live, so it will be awesome to be able to play in front of my family and friends. It's kind of surreal because I grew up watching those games and being a fan and I always hoped I would be able to play at that level. I'm happy to have the opportunity to be on the other side and be on the ice."

The Thunder, an ECHL affiliate of the National Hockey League's (NHL) Edmonton Oilers and the American Hockey League's (AHL) Bakersfield Condors, announced the signing of Schartz and fellow defenseman Brenden Smith last week. They will report to preseason practices in early October in preparation for the Thunder's home and season opener on Oct. 11 against the Indy Fuel.

"I have been training all summer and getting ready for the season," Schartz said. "This will be my second full year of playing pro hockey so I know what I need to work on and the weaknesses I need to address to have a great season in Wichita. I'm really excited about it."

Wichita, the largest city in Kansas, opened the 15,000-seat INTRUST Bank Arena in 2010. Last season, the Thunder ranked in the top five among ECHL teams with an average attendance of approximately 5,000.

"It is a pretty big city, the team has a very good fan base, and the games are well attended, so it will be very cool," Schartz said, noting that Wichita will host the ECHL All-Star Classic for the first time on Jan. 22. "I'm super excited about it. This is where I wanted to be and it's going to be awesome."

He hopes to stay in Wichita for the entire 2019-20 season, unless he is called up to the program's AHL affiliate in California.

"My goal is to get (to Bakersfield) this season, but I am not going to focus too much on that," Schartz said. "I am going to work as hard as I can this season and be happy and content, grateful that I get to play at home. If God wants me to be in the AHL, it will happen. I will follow wherever He leads."

He said playing for three teams last season came as a surprise, but he made the best of it.

"It was not what I expected, but God had a reason behind all of it," Schartz said. "I got to meet three times as many people as most guys get to meet, being on three different teams, and it all worked out because the coach in Toledo put a good word in for me with the Wichita coach."

Bruce Ramsay, a former player for the Thunder in the early 2000s, is entering his first season at the helm. A former head coach for the ECHL's Tulsa (Okla.) Oilers from 2009-15, he spent the past three seasons as an assistant coach with the AHL's Grand Rapids (Mich.) Griffins, guiding them to the 2017 Calder Cup title.

Ramsay is a defensive-minded coach who Schartz said he is looking forward to developing under.

"I'll play whatever role they need me to play," he said. "My style is a smooth-skating, puck-moving, offensive defenseman who creates scoring chances and limits chances against."

Last season, Schartz scored three goals and distributed seven assists in 33 games between the three ECHL teams. Over three seasons with the Flames (2015-18), he totaled 129 points (48G, 81A) in 99 career games. He completed his degree in business marketing through Liberty's online program last year before walking in its Commencement Exercises in May.

Schartz plans to return to Lynchburg next month, when he will work out with the Flames and be on hand to support them for their home and season opener against Duquesne (Pa.) on Sept. 20 and series against Indiana University of Pennsylvania on Sept. 26-27 at the LaHaye Ice Center.