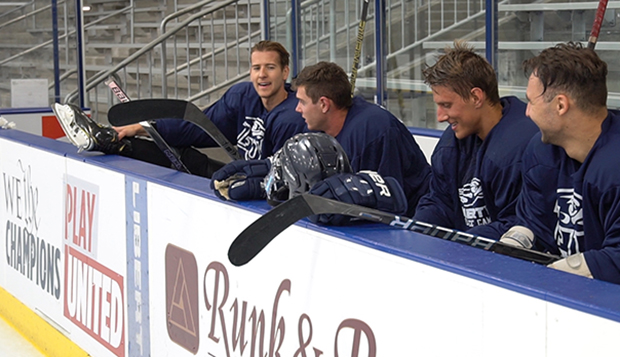 Before Liberty University began fall semester classes on Monday, action and excitement returned to the LaHaye Ice Center this week with a full slate of tryouts for the Flames' ACHA Division I, II, and III men's hockey teams, from Sunday through Friday.

The Flames' coaching staff, led by Kirk Handy who is entering his 20th season at the helm, finalized its 25-man DI roster on Thursday. DII Head Coach Ben Hughes announced his 25-man squad on Friday, and DIII Head Coach Jared Smith made the final cuts to his 25-man team on Saturday morning.

"It's been fun and fast and great hockey," said Liberty DI Associate Head Coach Jeff Boettger, who works primarily with the Flames' defensemen. "We have a super solid D corps. One through eight, we have the most depth we have ever had."

That includes two transfers originally from Ukraine, sophomore Dmytro Kobylyanskyi and junior Vitaliy Novytskyy, who have played junior hockey together while staying with the same host family in the United States.

More than 90 returning and prospective players participated in this week's tryouts, which featured more individual skills assessment drills than past tryouts. In previous years, intra-squad scrimmages were the main focus for coaches determining which level was the best fit for returning and incoming players.

"Tryouts went fantastic, and we are really pleased," Hughes said. "This year, we implemented a practice for all of the skate sessions where we got to see them more in one-on-one situations to see how they battle for and how creative they can be with the puck. We also put them in three-on-two and four-on-three situations to see how they react on the power play and penalty kill. Seeing how they play the game in specific contexts helped us to better judge their abilities."

Whereas Hughes only lost one returning player — sophomore forward Devin Melice, who was promoted to the DI squad — he pulled up three from Smith's returning DIII talent pool — sophomore forward Justin Barstead and defensemen J.D. George and Max Mitchell — to bring the total newcomers for DII to 10.

"It is awesome to see the system and the programs working together to create more opportunities for more people," Hughes said. "I am really excited about them coming along and being developed, getting a lot of ice time. These are guys we are going to rely on to be impact players right away."

Hughes also welcomes a new assistant coach, former defenseman Matt Cruickshank. The two were teammates in 2016-17, when Hughes was a senior captain and Cruickshank was a freshman.

"Matt's doing a great job," Hughes said. "His best credential for coaching is that he played the game at a high level, even before arriving at Liberty. He is a smart hockey guy and knows what to look for and how to keep developing guys. He's got a really good eye for that."