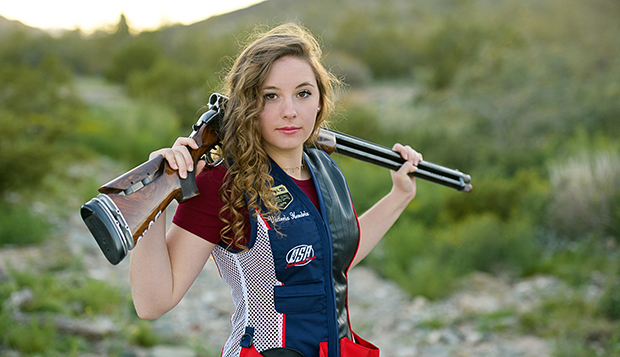 Victoria Hendrix, the reigning Scholastic Clay Target Program (SCTP) Junior Ladies Bunker Trap National Champion and 2018 Junior Olympic Champion, has the 2020 Olympics in Tokyo in her sights as she joins Liberty University's shooting sports program this fall. She will travel to Kerrville, Texas, to compete in the first phase of the USA Shooting Olympic Trials from Sept. 10-14.

Hendrix, a National Merit Scholar from Phoenix, is enrolled in Liberty's biopsychology program with enough credits to be classified as a sophomore. Though she started competing in the shooting sports at the age of 9, she has only focused on bunker trap for the past two years.

"It's incredibly competitive and, typically, you don't really start doing this well until you've been shooting four or five years in the sport," Hendrix said. "I attribute it all to God. It's a total God thing that He's just allowed me to get so far so quickly and to put the right people in my life to help enable me to pursue such gifts and make me the best I can be."

Shooting sports Head Coach Dave Hartman recruited Hendrix at a competition in Tucson, Ariz., in early 2017, realizing her potential and how she could help elevate the Lady Flames' program.

"She will raise the bar for everybody," said Hartman, who will host an informational meeting for the third-year program on Wednesday from 6-8 p.m. in the LaHaye Ice Center before tryouts are held next week. "If she makes it on the Olympic team, training for that will become her focus."

Hendrix is looking forward to practicing with her new teammates at the Liberty Mountain Gun Club, which is set up for training in the Olympic disciplines of bunker trap and international skeet, her second-strongest event.

"It is a beautiful course," Hendrix said. "I'm ecstatic about it, honestly. I love the opportunity. It's a very unique thing. It's really been cool to see the journey God has taken me on. I'm excited for it. I don't know where it's going to lead. Even if it ended today, I feel blessed to have gotten this far, with all the people I've gotten to meet and to be put in situations like this."

After spending as many as 21 hours per week at her home range over the summer, she plans to train at least eight hours a week while balancing her studies.

Hendrix first visited campus for College For A Weekend (CFAW) last September and has adapted quickly to life at Liberty.

"It's been fabulous," she said. "I've really enjoyed it. Everyone's so friendly and outgoing. You can definitely see there's a love for Christ on this campus, which is one of the reasons I chose it. Everyone is passionate about Christ and community and bettering everybody else around them."

She is excited to get her medical training through the School of Health Sciences and eventually enter the field of neuroscience.

"I really like how the subconscious and the conscious interacts," Hendrix said. "I really want to help in treating stroke victims."

She visited the Liberty Brain Lab during her CFAW stay and looks forward to developing research in the field.

"It was very cool," Hendrix said. "I like how forward-thinking Liberty is, especially in the medical sciences and how they incorporate not only cutting-edge-level science, but also Jesus in that and take that perspective on it."

She said succeeding in shooting sports involves as much mental as physical preparation, and plenty of faith and reliance on God.

"Shooting has really helped me just with both the mental acuity and the physical fitness of keeping up both aspects in order to be a more successful shooter," Hendrix said. "It has really taught me a lot about focus and dedication. I like to say you're always trying to pursue excellence, not perfection, because you can never achieve the level of perfection, but you can be excellent at something."

She knows she will have to shoot at an extremely high rate of accuracy in order to qualify as one of four women and four men to represent Team USA in the shotgun events at the Summer Games next July in Tokyo, Japan.

"It has to be pretty near close (to perfection)," Hendrix said.

She estimates she will have to hit 95-96 percent of her targets to reach the final phase of the Olympic Trials and 97 percent or more to have a shot at an Olympic team bid.