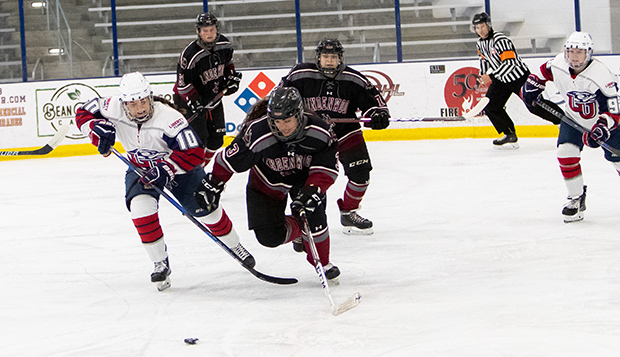 Lady Flames forward Aly Morris (10) battles a player from Lindenwood Belleville, one of six new conference members, for the puck in a game last season. (Photo by Kevin Manguiob)

Liberty University's ACHA Division I women's hockey team will be affiliated with a conference for the first time this year, as one of six founding members of Women's Midwest College Hockey (WMCH).

Liberty has played as an independent since joining the ACHA for the 2006-07 season. It will join Lindenwood-Belleville — the team it defeated for a third national championship in five seasons in late March — as well as Minnesota, McKendree, Midland, and Minot State.

All teams will compete in a WMCH championship tournament hosted by Lindenwood-Belleville from March 6-8 in St. Louis. The winner will receive an autobid to the ACHA DI National Championships set for March 25-29 at Comerica Center in Frisco, Texas.

"Most of us (except Midland and Minot) were independents and we all saw value in joining an elite conference to strengthen our schedules, build on rivalries, and have a year-end tournament to compete in," Lady Flames third-year Head Coach Chris Lowes said. "That will be a great challenge and give us another goal to pursue as a team. It is also a great chance for final preparation before nationals."

The alignment of the teams instantly makes the WMCH the strongest ACHA Division I conference in the nation. Five of the six teams — all but Minot State, which is moving up from the ACHA Division II level — finished the 2018-19 season in the top eight in the final ACHA DI rankings, a criterion used to determine the eight teams that qualify for nationals.

"All six teams are talented and competitive on the national stage," Lowes said. "The five of us returning to DI all have nationals experience over the past couple seasons and Minot State was arguably the best team in DII last year."

Liberty has finalized its 2019-20 schedule, which features nine games against three of the five teams in the WMCH — all but Minnesota and Minot. It also includes home and away series against Adrian, which was ranked No. 1 in the nation for the majority of last season, and two games against Miami (Ohio), which won three national tournaments in four years from 2014-17. The Lady Flames split their series at Miami last season before defeating the RedHawks, 4-1, in the national semifinals.

"The goal this year was to challenge our team every weekend with the top teams in the ACHA, and I believe we accomplished that," Lowes said. "We are playing the majority of the top teams with nine games against teams in the top five and 16 games overall versus top 10 teams based on last year's final rankings."

The Lady Flames will return to campus this weekend and start skating on Sunday in preparation for their first exhibition matchup, set for Aug. 31 at 1 p.m. at the LaHaye Ice Center against the Hamilton (Ontario) Hawks. After hosting the Washington Pride U19 travel team on Sept. 7-8, Liberty will open ACHA play with three games at WMCH opponents Lindenwood Belleville (Mo., Sept. 27-28) and McKendree (Ill., Sept. 29).

"Kicking the season off on the road against Lindenwood-Belleville is a great way to start the regular season schedule," Lowes said. "We are excited to get things going."